What did Moses see in the ‘Burning Bush?’

The first part of Exodus chapter three details Moses’ encounter with the ‘burning bush.’  I re-read this portion of Scripture the other day as part of a recent topical study when I saw something I had never seen before. 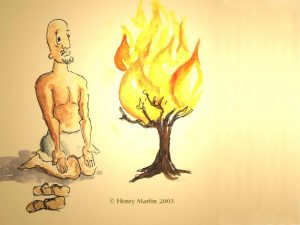 Moses tells us precisely what he saw in the burning bush.

I shared what I found at Torah Study last night and, with more than 350 years of ‘Bible knowledge’ between the seven of us, not one of us had ever noticed what Moses saw in the burning bush.  That alone was an interesting lesson in how our paradigms can be shaped, even when the text is startlingly specific…

So, what exactly did Moses see?  Let’s read the first five verses:

Now Moses was pasturing the flock of Jethro his father-in-law, the priest of Midian; and he led the flock to the [a]west side of the wilderness and came to Horeb, the mountain of God. 2 The angel of the Lord appeared to him in a blazing fire from the midst of [b]a bush; and he looked, and behold, the bush was burning with fire, yet the bush was not consumed. 3 So Moses said, “[c]I must turn aside now and see this [d]marvelous sight, why the bush is not burned up.” 4 When the Lord saw that he turned aside to look, God called to him from the midst of the bush and said, “Moses, Moses!” And he said, “Here I am.” 5 Then He said, “Do not come near here; remove your sandals from your feet, for the place on which you are standing is holy ground.”

Did you see it?

Even upon reading the passage out loud, our group missed it…  In fact, the only reason I noticed it is because I was on a mission reading every mention of ‘the Angel of the Lord’ in the Tanak.  And, BANG!  There it is!

A better question is, “WHO did Moses see in the burning bush?”

The timing for seeing this could not have been better!  Last week I wrote Was Jesus on Mt. Sinai?  The question explored has particular import in understanding His connection with the giving of the Torah and our obligation to ‘keep My commandments.’  So, when I read,

I got excited.  It is another stark proof that Yeshua (Jesus) was not only there, but intimately involved in every step, from Creation until Revelation!

Now, lest you think I am running ahead of logic, let’s take a look at several of the ‘Angel of the Lord’ passages to verify that indeed, each is a ‘Christophany‘ (to use an established term most are familiar with…).

John 1:18, in a passage concerning the divine nature of Yeshua the Messiah, says,

No one has seen God at any time; the only begotten God who is in the bosom of the Father, He has explained Him.

In saying this, John clearly teaches that ALL visible encounters with ‘God’ are actually Him revealing Himself in/through Yeshua.  (The previous ‘Christophany’ link confirms this, though I may not agree with everything on that site, I do agree on this point.  See more here.)  His glory is revealed to varying degrees, depending on the particular event/circumstances.

Hagar, in Genesis 16 has an amazing encounter with the Angel of the Lord and acknowledges that He is Yahweh (‘the Lord’),

“Behold, you are with child,
And you will bear a son;
And you shall call his name [d]Ishmael,
Because the Lord [e]has given heed to your affliction.

13 Then she called the name of the Lord who spoke to her, “[h]You are [i]a God who sees”; for she said, “Have I even [j]remained alive here after seeing Him?”

Hagar speaks with ‘the angel of the Lord’ and in v. 13 it tells us that it was ‘the Lord’ who spoke to her.  Understanding John’s teaching that ‘no one has seen God at any time’ and Hagar’s amazement that she had this conversation and is still alive, we can see that Yeshua is the One she spoke with.

Another amazing ‘Angel of the Lord’ encounter is in Judges 13!  This is an extensive encounter between Samson’s mother and the Angel of the Lord followed by Manoah, her husband, praying that He return and HE DOES!  Even more interesting is the connection with asking for and accepting sacrifices and worship (v. 23).  Like Hagar, Manoah and his wife are afraid they will die having seen ‘God’ (v. 22).  Read that passage in your Bible and highlight every use of ‘the Angel of the Lord.’  You should get about eleven!!

The Angel of the Lord, with a wink and twist of humor, leaves a clue that will not make sense until Isaiah comes along…

For a child will be born to us, a son will be given to us;
And the government will [a]rest on His shoulders;
And His name will be called Wonderful Counselor, Mighty God,
Eternal Father, Prince of Peace.

I just have to laugh and marvel all at the same time.  What a mighty, and humorous, God we serve!  The depth of the mysteries of His Word!  And, here, it clearly connects ‘the Angel of the Lord’ with Yeshua, the ‘Wonderful Counselor!’

There are a number of other ‘Angel of the Lord’ passages…

Genesis 22, at the offering of Isaac.

Numbers 22 has an extensive encounter with Balaam and the Angel of the Lord.

Gideon speaks with Him in Judges 6.

All interesting passages worth your time to explore.

But, in keeping with my amazement at Yeshua’s appearance in the burning bush and His previously discussed presence on Mt. Sinai at the giving of the Torah, I found one other ‘Angel of the Lord’ appearance that cements His involvement with the Law and our need to be obedient.

Now the angel of the Lord came up from Gilgal to Bochim. And he said, “I brought you up out of Egypt and led you into the land which I have sworn to your fathers; and I said, ‘I will never break My covenant with you, 2 and as for you, you shall make no covenant with the inhabitants of this land; you shall tear down their altars.’ But you have not [a]obeyed Me; what is this you have done? 3 Therefore I also said, ‘I will not drive them out before you; but they will [b]become as thorns in your sides and their gods will be a snare to you.’” 4 When the angel of the Lord spoke these words to all the sons of Israel, the people lifted up their voices and wept. 5 So they named that place [c]Bochim; and there they sacrificed to the Lord.  Judges 2:1-5

As we’ve previously seen, and many, many theologians agree, the ‘Angel of the Lord’ appearances are ‘Christophanies,’ or appearances of Yeshua in the Tanak, AND, He is the One who brought them up from Egypt, swore to the Fathers and made the covenant…  the ONE who demands obedience….

Just like at the end of the ‘Jesus on Sinai’ post, I sit here STUNNED!  How has Christendom justified claiming that ‘Jesus did away with the Law?’  Or even, ‘changed’ or ‘abrogated’ any of it?

I am sorry, but that is absolute and utter fallacy!

He said in Matthew 5:18 that ‘not the smallest letter or stroke will pass from the Law until all is accomplished.’

Brothers and sisters, Yeshua (Jesus) is the atoning sacrifice that frees us from the curse of the Law and allows us back into covenant with Him!  His covenant IS the Torah!  He appeared to Moses in the burning bush to bring Israel OUT of Egypt.  He calls us today to come out of Babylon!  Leave the religious traditions behind and seek the TRUTH of the Word!  Walk as He walked!  If you love Him, keep HIS commandments, the Torah!

He saves us by His grace and calls us to obedience.

If this has blessed or challenged you, please consider sharing it!  Thank you.

18 Responses to What did Moses see in the ‘Burning Bush?’