Until The Two Become One (Must read, by Ken Rank)

Following is a terrific article by Ken Rank explaining the Two Stick Prophecy of Ezekiel 37, a passage that is largely overlooked by theologians in its significance.

Until the Two Become One

What the herders did not see before them was their brother. In fact, before Joseph finally reveals himself to his brothers, they had spent at least many hours with him, dining, being entertained, and also being berated and yet they saw only an Egyptian. To anyone who 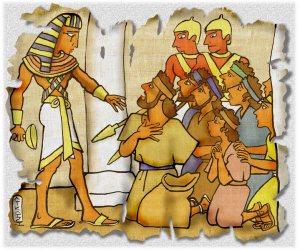 might have been standing at a distance, looking upon Joseph and that family of herders, being able to see that they were family would likely have been impossible.

The Prophet Ezekiel gives us a similar end-time picture in that we have two players who might just as well stand in such contrast. In chapter 37, verse 16, where we read the following:

What is easy to miss in the above verse is that Ezekiel takes two blank sticks that represent people and he is to identify who the two sticks are. The first he determines as Judah and those who are joined with Judah. The second stick is said to be for Joseph, but a stick that is Ephraim, and it includes the House of Israel and those joined to Israel. So we have a lot going on in this one verse. Most scholars believe that these two sticks represent the Whole House of Jacob, what was once a great nation that divided into two Kingdoms, Judah and Israel. But why the use of those names?  Continue reading at United2Restore

2 Responses to Until The Two Become One (Must read, by Ken Rank)