One of the unfair charges often leveled against Rabbinic Judaism is that they added to the Word of God by ‘fencing the commandments.’  And, while the charge may be true, it is 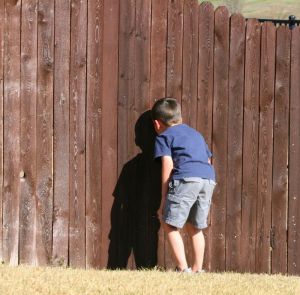 generally leveled as if no one else is guilty of the same and the Jews have therefore committed some dastardly crime.

While reading a paper written by Messianic Jewish friend and midrash partner, Jonathan Krause, a section really caught my eye.  He wrote,

When did sin occur on earth?  Many scholars will say that it happened when Adam ate the fruit of the tree of knowledge of good and evil.  However, in Deut. 4:2 G-D tells us not to add or take away from his word(s).  Since words were added to what G-D said, it created a door to sin.  But, Adam had the roots of sin in his heart when he added to the words of G-D.  Perhaps he did not trust G-D in that he had to instruct Eve further by telling her she was not only not to eat of the fruit, but not to touch it.

I looked up from the paper and said, “Adam fenced the commandment!”

[Now, whether Adam did or Eve did is immaterial. The point is, in Gan Eden, prior to taking of the tree, Adam being with Eve, she clearly states, “God has said, ‘You shall not eat of it, or touch it, or you will die.'”]

“You know?  You are right,” was his response!  And, thus began a discussion on fencing the commandments.

My purpose here is not to further point at Rabbinic additions and subtractions from the Torah through Oral Tradition and Rabbinic decree, but rather to point out first that man’s propensity, from the Garden of Eden, is to find a way around or to take authority over the simple commands of Yehovah!

Christendom is as guilty of fencing commandments, they’ve just gone about it a different way.  Where the rabbis presumably fenced to protect the commands, Christendom has created their own commands to turn people away from God’s commands.

The point is, both groups, like Adam/Eve, set themselves up as gatekeepers to and judges over the everlasting Word of God.

Tear down the fences of man-made commandments and ritual.

Aside:  I have recently invited Jonathan Krause to do some writing for this blog…  Be looking for some of his thoughts.

9 Responses to Fencing the Commandments