How could one chase a thousand,
And two put ten thousand to flight,
Unless their Rock had sold them,
And the Lord had given them up?
Indeed their rock is not like our Rock,
Even our enemies themselves judge this.

It led me on an interesting study of the word ‘rock’ and that title for Yahweh and/or Messiah.

Currently, I am reading a dynamite book, The Return of the Kosher Pig, by Rabbi Itzhak Shapira, and I ran across a related remez that knocked my socks off!  In it, as he makes a scholarly defense from rabbinic sources 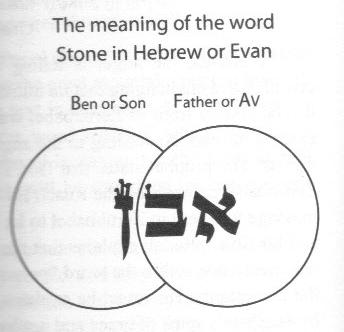 for the Divine Messiah Yeshua, there is a picture and related thoughts that again brought to the forefront this study of the ‘Rock.’

Admittedly, the Hebrew word used in Devarim is not the same as the word meaning ‘stone,’ but the connections are obvious.

As one can see from the illustration to the right (from page 90 of The Return of the Kosher Pig) the Hebrew word for ‘stone’ or ‘evan’ can be divided into two words, ‘Av’ and ‘Ben,’ (where the ‘bets’ overlap) meaning ‘father’ and ‘son’ respectively.  WOW!!  What a neat picture…  (If you don’t get it, hang on.)

The first and most obvious picture we see is the ‘echad’ (pronounced ek-kad) nature or unity of Mashiach with the Father.  In the Shema we say,

The last word in Hebrew is ‘echad,’ ( אחד ) which means ‘one.’  However, it does not mean singular ‘one.’  Here are two verses to illustrate:

For this reason a man shall leave his father and his mother, and be joined to his wife; and they shall become one (echad) flesh.

He said, “Take now your son, your only (yachid) son, whom you love, Isaac, and go to the land of Moriah, and offer him there as a burnt offering on one of the mountains of which I will tell you.”

These verses demonstrate that there are two different words in Hebrew that are translated as ‘one.’  Yachid meaning ‘one and only, singular,’ and ‘echad’ meaning ‘unified one.’

In our illustration of the word ‘stone’ or ‘אבן‘ we have a picture of the unified ‘oneness’ of Yahweh.  Father, אב and son, בּן.   Reading Hebrew from right to left we get  אב  בּן .  Or, laying the ‘bets’ on  each other, we get אבן a ‘unified father/son.’  Fascinating picture…  but did the rabbis ‘get this?’

Rabbi Shapira makes the point that numerous rabbis understood ‘stone’ as an illustration or title of Mashiach.  A prime verse is Zechariah 4:7!

‘What are you, O great mountain? Before Zerubbabel you will become a plain; and he will bring forth the top stone with shouts of “Grace, grace to it!”

When Yeshua declared, “I and the Father are one,” he declared himself to be the evan from Zechariah 4:6-7!  Tzvi Sadan explains further:  Stone (evan) as one of Messiah’s names is found in Jacob’s blessing of Joseph… (Genesis 49:24).  Three explanations are given as to why Messiah is likened to a stone.  Based on the characteristics of the Hebrew, Rashbam concludes that the ending of the word is a suffix, thus turning stone (evan) into father (av).  Stone of Israel then means ‘household of Israel’; accordingly, the blessings is abut the Son of Joseph who will become “the shepherd of the house of Israel.”

R. Shapira continues with several very deep quotes from various rabbis…  some who embraced Yeshua haMashiach (Rabbi Yechiel Lichtenstein as one example) and some who did not.  But through the various quotes, he identifies a thread that understands the Mashiach will be a ‘stone.’

Without pursuing Rabbi Shapira further, though I highly recommend his scholarly work, I want to look at a few other places we see the word ‘stone’ associated with the Mashiach?

You were watching as a stone was cut out, but not by human hands. It struck the statue on its iron and clay feet, breaking them in pieces.  Daniel 2:34.

Daniel relates a vision that pictures Mashiach destroying the kingdoms of men and establishing His own everlasting Kingdom.

Rav Shaul speaks of this stone in this manner,

Why? Because they did not pursue it by faith, but as though it were by works. They stumbled over the stumbling stone, 33 just as it is written, “Behold, I lay in Zion a stone of stumbling and a rock of offense,  And he who believes in Him will not be disappointed.”  Romans 9:32-33

A note on this verse in The Jewish Annotated New Testament explains that the intent of the stone was not ‘to cause failure but, ironically, to help them by slowing them down so they did not miss the righteousness they were to declare.’

Peter, the Apostle, has a similar understanding of the ‘stone,’

4 And coming to Him as to a living stone which has been rejected by men, but is choice and precious in the sight of God, 5 you also, as living stones, are being built up as a spiritual house for a holy priesthood, to offer up spiritual sacrifices acceptable to God through Jesus Christ. 6 For this is contained in Scripture:

“Behold, I lay in Zion a choice stone, a precious corner stone,
And he who believes in Him will not be disappointed.”

7 This precious value, then, is for you who believe; but for those who disbelieve,

“The stone which the builders rejected,
This became the very corner stone,”

“A stone of stumbling and a rock of offense”;

for they stumble because they are disobedient to the word, and to this doom they were also appointed.

With this understanding, we can better decipher an exchange Peter and the Mashiach had…

13 Now when Jesus came into the district of Caesarea Philippi, He was asking His disciples, “Who do people say that the Son of Man is?” 14 And they said, “Some say John the Baptist; and others, Elijah; but still others, Jeremiah, or one of the prophets.” 15 He *said to them, “But who do you say that I am?” 16 Simon Peter answered, “You are the Messiah, the Son of the living God.” 17 And Jesus said to him, “Blessed are you, Simon son of Jonah, because flesh and blood did not reveal this to you, but My Father who is in heaven. 18 I also say to you that you are Peter, and upon this rock I will build My church; and the gates of Hades will not overpower it.  Matthew 16:13-18

Our understanding of the Hebrew word ‘evan,’ or ‘stone,’ sheds some light on this misused and seeming mystical passage.

Simon/Shimon rightly identifies who Yeshua is.  He is none other than the Mashiach, Son of God.  THE STONE the rabbis were looking for, as it were.  Yeshua proceeds to refer to Shimon by his Greek name, Petra* or Petros, meaning ‘rock,’ and points to Himself as ‘this rock’ that is the corner stone!  Peter then has an understanding, later revealed in his first epistle, that Mashiach is the prophesied foundation stone, with himself and the rest of us being living stones to be built into a living temple.

*Like some, I believe it is possible the Gospels were originally written in Hebrew, then translated into Greek yielding the manuscripts we have today.  If such is the case, Yeshua would have referred to Shimon as ‘Tsur,’ the Hebrew word meaning ‘rock.’  Either way, the point of the conversation remains the same.

There are many more verses dealing with ‘stone’ or ‘rock’ that point to Mashiach.  Have a favorite that comes to mind?  Post it below…

[Here is a follow-up study with a few more verses and a couple cool remez thoughts.]

I pray this little study has blessed you.

Yahweh bless you, and keep you;

Yahweh make His face shine on you,
And be gracious to you;

Yahweh lift up His countenance on you,
And give you peace.