“In the Courts of my King!”

Following is a guest post written by my son Jeremiah.

This whole trip has been quite the experience. Hi, I’m Jeremiah Rambo, Pete’s second born. I’m 17 years old, and beginning to find my feet in the world that I live in. Going on

this trip has helped me mature in many ways, and realize how much I had wrong in many places in my life.

Often, I have no trouble with words, but sitting here trying to find the words to describe what is in my heart, it’s difficult. When the airplane touched down, I would like to say I felt a tug in my spirit that said, “This is home.” or something to that effect. When the plane touched down, all I felt was the immense pressure on my bladder, and the urge to find a bathroom. Then I felt at home.

When we arrived at the house we are currently staying at, we immediately connected with our kind host, Tzemach. Seeing his art gallery of stones, and touching a piece of rock that possible was around during the time of Yeshua, got me in a place I’d never felt before. I’m a very factual person, and if it isn’t supported by facts or logic, then it goes out the window. The fact of something hitting my emotions was a new, well, ‘feeling’.

We took many trips touring the Land and visiting places that were around since a long time ago. Getting to tour Hezekiah’s Tunnels was something I’ll never forget. Seeing tunnels carved through solid rock and hearing it was only done in a short period. That’s facts, something I understood. As I touched the rock, though, I felt the despair and the haste to finish the tunnels before the Assyrians laid siege to Jerusalem. Again it touched a piece of me I never could quite understand.

But today, I think is the piece of the trip that I’ll hold onto forever. Today we had the privilege of going to the Kotel, or Western Wall, as it’s called in the English tongue. I walked forward expecting something to be in my

heart as I approached the wall. To my disappointment, I really felt nothing. I mean, this is a part of the Temple, shouldn’t I feel something?

All it took was for me to touch it. As soon as I laid my hands flat against the smooth, cool stones… It’s hard to describe. There were many Jews around praying to Elohim, and it was a subdued loudness, but as soon as I touched it, and laid my hands against the wall, and touched my forehead to the rock… It was hot, cold, electric, I almost couldn’t hold on. I had gone with the intention to pray, but I was at a loss for words. All I could do was stand there, and try not to cry. There was a peace I hadn’t felt in a long time. 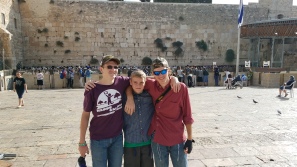 To go back a few weeks or so, I’ve been struggling with trust. Mostly in other humans. A good friend of mine and I have had a few talks about it while I am here in Israel. I thank him highly for his advice, and I can assure him that all has been taken to heart, and being applied to my life. You know who you are, and I thank you so much.

I wanted to pray at the wall that Elohim would help me to restore my trust again, that I may dwell in unity with other people, but I just couldn’t. Feeling that smooth stone under my fingertips, and pressed against my forehead, I felt a whisper in my Spirit, that still silent voice that I have trouble listening to. “I know.” Just those two little words, and I almost fell apart. “I know.” and that was what I had come to Israel for. We had gotten to hear Moshe Kempinski speak, and one of the things that stuck out to me was no one comes to the Land on accident. We are all invited from Abba, and He calls us here for a reason.

Touching that stone, I was no long on earth, but standing in the Courts of my King, I couldn’t hear anything, feel anything, it was just me and Him. I was hit in a place where I had never been hit before. Right in the feelings. And I knew why I had been invited to Israel

Just before I sat down to write this post, my brother was practicing his drums and I’m sitting on the couch. Suddenly one of the songs that comes on is ‘Oceans’ by Hillsong United. I had known that song was in his playlist, but hearing it, I was taken back to a place a few years ago, where I had first heard that song and learned how to dance. I could only sit and try not to cry on the couch. The bridge lyrics are,

As I heard those lyrics, I felt it was a wink and a nudge from the Father, affirming what I had felt this morning. I had found a place where my facts met my emotions, and in the middle of it all, Abba was smiling down on me.

The time is quickly passing here in Israel, and I long for the day I can reside in the Courts of my King forever, but until then, I’m trusting He has a plan for everything and now I choose to walk in it.

Shalom in Messiah from Ha’Eretz!