In fact, good friend Tzefanyah had a vision a few days ago wherein he saw the Father running toward the prodigal son (Ephraim) and he heard Father say (paraphrasing), “As I accelerate toward the lost son, so prophecy accelerates!”

I can promise you, from my vantage point, many very big things have begun to happen very quickly.  The timetable most certainly seems to be accelerating. 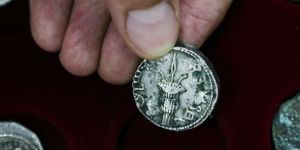 When Kelly and I went to Israel back in May, we took six ounces of silver to be delivered to the Temple Institute as a gift and as a means of obedience to Scripture.  Well, imagine my joy when Sis Loammi sent me this article:

Biblical commandments not practiced for thousands of years are slowly returning to life. One such commandment, known as the Machatsit HaShekel, or half-shekel, is making a comeback thanks to a simple Jewish tailor in Jerusalem.

The half-shekel, one of the more obscure commandments found in the Bible, played an important role in Jewish history. Every year, each Jewish male over the age of 20 was obligated to give a compulsory donation of half of a shekel (Exodus 30:15). Regardless of status or wealth, the same amount was given by each man. Since it is forbidden by Torah law to actually count Jews, counting the coins took place of a national census. The half-shekels that were collected were used as a form of tax to support the Jewish Temple.

The nation of Israel continued to observe the commandment even after the First Jewish Temple was destroyed until it was outlawed by Roman Emperor Hadrian in the year 135 CE. Even Jews who lived outside of Israel continued to donate the half-shekel, despite the Roman Senate forbidding the export of gold and silver.

Reuven Prager, a tailor specializing in Biblically-styled clothing, is responsible for today’s revival of the lost commandment of the half-shekel. Prager’s passion for Biblical authenticity led him to investigate the commandment of the half-shekel. Being a practical-minded artisan, he began to mint his own half-shekel in March 1997 with a run of 1,000 coins. Today, Prager continues to mint a new half-shekel coin every year with a new design based on a Temple vessel or tool that has actually been reproduced.

Prager explained to Breaking Israel News that the demand for the coins has gone up dramatically as people re-awaken to this essential commandment. When asked about people’s reactions, he said that it had a lot to do with the coin itself.

I highly recommend the rest of this most informative article about another recent development that is gaining momentum as people desire the coming of the Messiah!!