I have always loved eschatology, the study of end times prophecies.  While doing so about 15 years ago, I read an excellent book, worthy of your time, that had a fantastic quote in the introductory chapter.  The principle explained has been a guiding principle in all of my Bible study ever since.  Here is the extended quote followed by some thoughts…

Our responsibility as students of the Word is to make every attempt to understand what is written in its most natural, 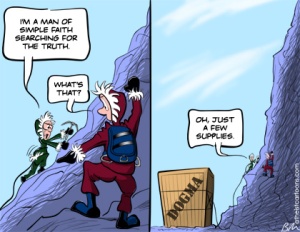 normal, customary sense, being careful to first look at all other passages that deal with whatever particular issue we are studying.  Remember-and this is critical-we have not found truth until we find the single common denominator that makes all of the passages fit together.  Psalm 119:160 teaches us that “the sum of Thy word is truth.”  In other words, you don’t have truth until you have processed all the passages dealing with a particular subject and found the single solution that accommodates them all without contradiction!

I often explain it this way.  Assume you have six passages dealing with a particular topic.  Using the face-value hermeneutic, passages 1, 3, and 5 say one thing, while passages 2, 4, and 6 appear, on the surface, to be saying something quite different.  Those who prefer what 1, 3, and 5 have to say conclude that the common denominator that pulls these three passages together is 15, and on 15 they will stand and give their life, if necessary, sweeping passages 2, 4, and 6 under the rug, so to speak.  On the other hand, those who prefer what passages 2, 4, and 6 have to say come to the common denominator of 12, and they, like their counterparts, are willing to die for their position, irrespective of what the three other passages might have to say on the issue at hand.

Which answer is right?  12 or 15?  Actually, neither is right!  If you want truth, you cannot ignore any of the passage that deal with the same issue, no matter how contradictory they may seem.  However, if you refuse to be sidetracked by the contradiction and keep looking for the resolution, you will eventually find that all passages fit perfectly into one common denominator: 60.  Now you have correlation without contradiction.  Now you have truth!

Until the common denominator is found, you don’t have anything except confusion.  Plain and simple.  Until then, you must simply admit  you don’t know.  That’s the best answer to give when you’re not sure!  Then you keep looking for that single solution that makes all the passages come together perfectly, without contradiction.

Well, as most fellow Messianics know, we are forever having to give a defense for what we believe and why.  Currently, I am embroiled in another one of those discussion/debate email exchanges where the other side simply refuses to understand that their paradigm is skewed precisely because they are sweeping contradictory passages under the rug!  And, I remembered the above quote.

As the above author rightly quotes, ‘The SUM of Your word is truth.‘

A single verse, or couple verses does not a doctrine make!…  Or, maybe it does, but if other Scripture contradicts the doctrine, then the doctrine is a false one.  Man-made!

No wonder there are 37,000 denominations!  Besides fighting over the color of the carpet in the nursery, bodies divide over Scripture because they refuse to find the point of correlation without contradiction!

Do you want truth?

Are there verses that don’t fit your paradigm?  Verses that you try to explain away?

See, many people say, ‘oh, that’s Old Testament…’ as if somehow the inerrant, inspired, everlasting, breathed Word of God has less value before the uninspired blank page between Malachi and Matthew than the word from the same unchanging God after that point.  If that is what they are saying, then you know almost immediately that they are sweeping important verses under the proverbial rug!  They have not arrived at ‘truth.’

Bottom line, there are no contradictions in Scripture.  If there are verses that do not fit your paradigm, it is not that the Author changed His tune, it is that you have not arrived at Truth.

4 Responses to What is truth?