Davening in the rear galley of a 777

There are still so many stories bubbling up from our recent trip to Israel.  It was such an  incredible trip that I am still processing the many events.  Even our flight home was ‘off the chain…’ 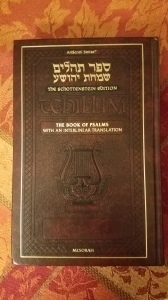 During our 21 days in the Land, we were blessed to have many close and personal encounters with Brother Judah.  It is what we had prayed for, but the Father’s answers far exceeded our expectations.  I prayed for more on the flight home knowing there would be many Orthodox on the plane.

With five of us traveling and the 777 having three seats across the center section, Kelly and I chose to sit in the center section and leave the boys in the three seats that were on the window side of the aisle.  I selected the aisle seat for a little more leg room and put Kelly in the center.  Initially a lady was trying to get situated in the seat to Kelly’s left.  I helped her put away luggage, etc…  Then, just before we pushed back from the concourse in Tel Aviv, an Orthodox gentleman in black hat and coat stepped up and through very broken English asked if Kelly and I could change places.  At first, I was confused by his sudden appearance, then, understanding that he was related to the woman and did not want to rub elbows with Kelly, I quickly made the switch.  I wanted to protect him.

Quietly, I thanked Abba for putting him next to me.

We settled in for a 12 hour flight and I hoped for an opportunity to talk with him.  The first nine hours or so were uneventful.  I napped, read the Torah portion in my Bible, ate, napped, etc.  He was up and down to both ends of the plane with friends and family, reading his Siddur, napping, etc.  It was pretty clear that he was not really interested in conversation.

About three hours from landing in Newark, NJ, the Captain announced that the rear galley was available to those who wanted to daven.  [Daven is the term generally used to refer to  the Jewish liturgical prayers and sometimes associated with the many bows/bends of the knees when Adonai is addressed.]

Immediately, upon the announcement, I wanted to go back there, but was very apprehensive, not wanting to intrude.  I certainly did not fit the profile of the numerous men I saw begin to head that direction.  I was glued to my seat and the Spirit was starting to push me out of it!

After making a decision what to do, I stood and dug in the overhead bin for my Schottenstein Interlinear Tehillim (pictured above) buried in my carry-on.  After securing it, I walked awkwardly toward the back seeing all of the black hats and coats crowded behind the curtain and pouring in to the aisle.  Here I was, obviously not one of them, wearing blue and white tzitziot but no kippah approaching their fringe.

When I got there, there was a very nice little open spot to 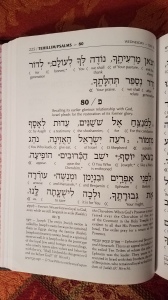 their side next to the emergency exit door with the sun streaming in.  I stood there, slightly off to the side and bowed my head and prayed for guidance, then opened my Schottenstein to Psalm 80 and began to slowly and purposefully pray through it even as I prayed a blessing and protection on these many dedicated men praying to my left.

More than once, I could feel them glancing over their shoulders trying to see what this goy was doing.  I proceeded to Psalm 133 and again read and prayed the Psalm, parts in English and parts in Hebrew.  When I finished, I quietly and humbly returned to my seat, leaving the Schottenstein laying on my tray table.

A few minutes later, the gentleman to my left returned and sat down.

Within a couple short minutes he showed genuine interest and began asking questions.

He asked me about ‘yoshki, yeshu, …’   I said, “Yeshua?  Yes, we believe He is the Messiah, but did NOT do away with the Torah.  Rather, Christendom has misunderstood and thereby twisted what He actually taught…”

The gentleman explained that he had lived in the Land for the last 20 years but he and his family were moving back to Brooklyn.  I asked incredulously, “Why?!?”  (It was a long story, but he understood that I was totally confused.)

He warned me against bad Christian Bible translations.  I didn’t explain that the problem in Christendom is less bad translation than it is disobedience to what the Scriptures clearly say….

We talked about the importance of learning to read the text in Hebrew and he really encouraged me to keep moving forward.  Her was very gracious and encouraging as were many that we met in Israel.  He was another example of the many Orthodox that we met who were very positive about our pursuit of Torah and our desire to be in the Land.

I asked that he remember us when he prays.  He was touched.

Before buckling in for final approach, his wife came to check on him and he delightfully introduced her to us and excitedly explained that we believe we are part of bney Yosef, the lost tribes.  She lit up and gave us a glowing smile and a warm greeting to Kelly.

Our conversation dwindled as we landed and I bid him farewell.

Almost as soon as I stood up a big burly Orthodox man that had been sitting behind Kelly tapped me on the arm and asked what the words on the back of Silas’ Greenwood Fellowship meant.  I explained that we were from a non-Jewish torah keeping group in western South Carolina.  Immediately, he began rapid-fire questions, “Do you keep Shabbat? Do you keep the feasts?  Where do you attend shul?  Why were you in Israel?”

He wasn’t rude, he was extremely interested and wanted to understand.  His eyes just got bigger and bigger, especially when I explained there are about 80 of us in western SC and we were part of a global move of non-Jews coming to Torah.  I explained we were there for Sukkot and the Second B’ney Yosef Congress.

He was amazed and enthusiastic.  Then, he leaned forward as the aisle began to move and we headed for the exit, and he said, “Study.  Keep moving forward.  you are on the right track.”  We were separated in the crowd and I didn’t find a chance to catch up with him as we headed to customs and connecting flights.

It was another of a long string of confirmations on this trip that Abba is doing something so amazing in our day.  We have crossed a threshold and the winds have changed.  Judah is seeing and understanding.  More than ever, we need to be going up for the feasts and interacting in love and humility with our brother.  Abba will handle the details.

7 Responses to Davening in the rear galley of a 777