I was thinking yesterday how blessed we are to be taking three of our boys with us on this trip to Israel.  For them it is their first international trip and for one it is his first commercial flight/airport experience.

Kelly and I have traveled overseas many times.  My experience began with a bush pilot 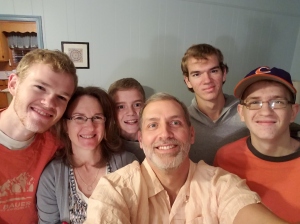 father and living in South America, then we share the military experience with overseas deployments and duty stations.  Traveling with boys in tow is a first with some new lessons that I will share as we go along, but I thought for the many friends we have who would love to take a similar trip, I would offer some thoughts on how this came about and how we prepared, particularly for the expense.

Last year, Kelly and I traveled to Israel.  All through the trip we ooVoo’ed our boys as well as sending texts and pictures.  When we arrived home, well after their bedtime, they met us at the door with hugs and immediately expressed that we could not return to the Land without taking them.  Easy for them to say!!  I saw the cash register start spinning!!

Well, upon the announcement of the Congress late last year and the particular good news that it would be immediately following Sukkot, the Feast of Tabernacles, I knew we had to go!  But, how?  After some quick back-of-the-envelope math, I figured to do it ‘right’ a rough $15,000 is what it would take!!  Whooo!  That’s a lot more than I have….

We gathered as a family and had a discussion and prayed about what we would need to do, and Kelly and I had a private Board Meeting…  Here is the rough gameplan and rough costs so you have an idea how to do this for yourselves!

First and foremost, make a committed decision to go!!

Once you are committed, the ‘how’ will begin to come together.

Our goal was to pay cash for as much as possible and to find ways to save/cut costs.  The guesstimated cost was daunting, but we began to assess our options with the goal being that five of the six of us would make the trip.  (Our eldest is in nursing school and someone has to milk goats and feed chickens….  Thank you, Gunnar!! )

Next, we assessed financial options.  First, we knew that there would be a tax rebate in the form of the EIC which would give us a boost, but out of that we were dedicated to paying a couple bills, too.  We are a typical American family that has debt and bills.  Providentially, we really started to get serious with paying off bills a few years ago and early spring we paid off a monthly consolidation loan that freed up a serious chunk of monthly outgo.  These however, while not enough to get close to the goal, were good steps.

Our next move, as a family, was to consider alternate income sources that we could focus on.  A HUGE oak tree fell on a neighbor’s property and we offered to clear it for free.  We purchased a log splitter and I traded some debt owed to me for a couple of chainsaws.  We started a small firewood selling business.  This particular endeavor had mixed results, but we are loaded with wood for this fall, so it may yet pan out as a good venture. 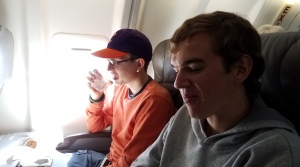 Our little farm has a small customer base of friends, so we decided to take all profits, usually rolled back into feed, and instead put it in savings.  We chose to pay feed out of pocket and look for a more economical way to meet some of that area to generate positive cash.

Abba (God) provided an unexpected blessing.  His Word says in Deuteronomy 28 and 30 that when we keep His Covenant (Torah) He will bless our flocks and herds as well as our bread basket (among many other things).  Well, we experienced this in ‘spades.’  We had a few milk does we needed to breed, so we sequestered a number of nine-month old does so the visiting buck could not get to them.  Well, he jumped the fence and went through the fence, and maybe when we weren’t looking, went under the fence.  The oddity was that in the four weeks we had him, we never saw him service a single girl.  We were convinced when we took him home that he was a bust.  Au contraire!!

All of the girls we wanted serviced and all of the girls we did NOT want serviced came up pregnant!  Most all had twins and many had triplets.  Kidding season was crazy busy with delivering, bottle feeding, weaning, etc.  Kelly said, “never again!!” while I was saying, “it is a blessing, we just have to figure out what to do with it.”  Long story short, we sold goats and sold goats and sold goats.  Without even realizing it until we had a nice bankroll, Abba’s little blessing turned into a sizeable boost in our savings plan.  Where our wisdom was firewood that didn’t pan out very well, He had another plan.

My job gave all bus employees a 10% raise and my supervisor moved me to a position that required more hours.  This was another 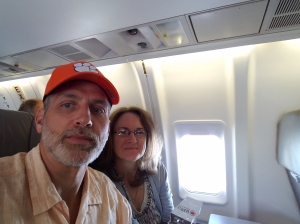 blessing (Kelly says, ‘sort of…’) that added to disposable income we could save.

Other little pieces that helped included the sale of a few chicken, sale of scrap metal, sale of some equipment that I no longer needed, income from odd jobs, etc.

With income taken care of, we took a look at how to save a little on the trip.  Initially we booked a really good deal on two rooms at a hostel in Jerusalem, but then some friends asked if we could all team up and rent a house in Jerusalem.  AirBnB turned out to be our best source, not having any direct contacts in the Land who could find us a house.  Hotels, especially during the pilgrim feasts are pricey.  Rental houses are the same but we searched and searched until we found something that fit our budget and parameters.  Located fifteen minutes from the Old City, in the western (Jewish) section of the city, with a view and full amenities, we found a deal that is just a couple dollars per person more than a hostel.  Granted, no sumptuous breakfast bar….  unless, Char and Kelly….  Hmmmm.  Now, I’m thinking.  😉

We rented a couple cars.  Initially, we considered a van, but the larger vehicle expense was exponentially more than a couple 4-5 passenger economy vehicles.  (Our 5 passenger is $15/day plus fuel costs.)  Besides, with a couple cars, we can split up if/when necessary.

A further savings is that we can prepare many of our meals and save over restaurant costs.  We have also selectively chosen some days with a tour guide, good friend Hanoch Young, but we have also elected to spend some days visiting sites that we have researched on our own or doing things that can be self guided tours.

We shopped airline tickets for weeks before buying at a low point in the fare tracker.  For us, the round trip tickets were secured for right at $1000 each.  We have not seen any prices lower since then and at times the prices have been quite a bit higher.

All total, including a nice travel allowance for food, gas, museum tickets and incidentals, we are still a bit under the original $15,000 guesstimate and have paid mostly cash as each ‘piece’ was paid for in advance.

I’ll share more on this topic as we enjoy this 21 day adventure.  Pictures and stories to follow.  I do hope this info will help encourage someone to commit to making the journey they have always wanted to, especially if it is to Israel.

Blessings from the international terminal in Toronto…

Details in 'About' page @ natsab.wordpress.com Basically, husband of one, father of four. Pastor x 11 years, former business and military background. Micro-farmer. Messianic believer in Yeshua haMashiach!
View all posts by Pete Rambo →
This entry was posted in A Thought..., B'Ney Yosef Congress and tagged family, how to, Israel, Jerusalem, overseas, travel. Bookmark the permalink.

7 Responses to Traveling international with family