As with many of our recent days, we only had a vague idea what we were doing when we got up this morning, yet here I am amazed at how the day unfolded and the incredible implications!!  Our plans, from some time back, was simply to have lunch with Rabbi Elan and Dr. Rivkah Lambert Adler.  Neither they nor we had any specific agenda or expectation, it was simply a lunch appointment.

Needing to get rest after a very late last night, we slept in a little and headed out around 11:30 to meet the others in our group at Rivkah’s at noon.  After a misdirection and a kind gentleman who gave me distances, in his words – ‘American’, we found the correct residence with a beautiful view of the valley between Ma’ale Adumim and South Jerusalem.  Pieter had his bird watching binoculars and we looked closely at the distant views of the City of Gold.

Lunch was a tasty fresh salad filled with many vegetables and light on lettuce, something I plan to replicate at home.  Rivkah also served sweet and sour meatballs and matzah followed by fresh fruit and macaroons for dessert.  The conversation was a delightful question and answer period with much unguarded conversation covering myriad topics with both Rivkah and Elan sharing their thoughts and heart. 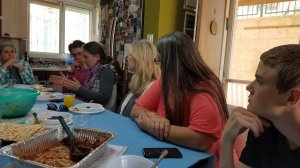 Some two and a half hours into the conversation Rivkah asked if we had a specific agenda that we wanted to cover, but we assured her that this was “perfect!”  My one regret was that we were so wrapped in conversation that we missed the 3 pm Shema!  Only later did it dawn on me that Elan drug his feet for his 3pm appointment and may have been hoping to sing that with us one more time.

After we finished the ten of us drove just up the street to a little shopping mall for coffee and a long discussion about our desire to bring teams of Ephramites from around the world to serve Judah and Jerusalem by picking up trash before Sukkot.  Keep your ears tuned to this site as we will have details in the coming days.  We will be bringing a team in September and hope some of you will join us!  This will be a very special trip that will also take in the Feast and some touring.

We split up after the coffee with some heading into Jerusalem for the evening and other racing back to the house to make dinner.  I had my ‘fix’ of Israeli olives…. 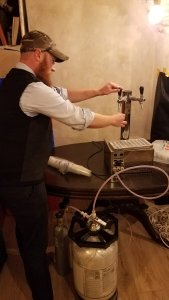 Our real challenge was deciding what to do next!!  This morning we received an invitation from Rabbi Harry Rozenberg to a special event at The Wine Temple at 8 Emek Refa’im, Jerusalem.  The location was a stunning setting of a wine cellar dating to the 1870s in German Colony where a historic Templar winery once did business.  Harry’s plan was to tap a keg of his Ten Tribes Tej that we could enjoy while he had a public conversation with Jan Khan Taimoor, a Pashtun Christian from America that understands his tribal connection to Israel.

Jan’s story was amazing as he explained growing up as a member of the 50 million strong Pashtun tribe in Afghanistan and asking hard questions of the Koran only to find Jesus as the Messiah in an acquired New Testament.  Today, he is a pastor in the US but has a clear connection with the Jews and a passionate love for Israel.  His explanation of the wars in his region of the Middle East was fascinating and the single most important take away was his comment on borders and boundaries.

He explained that Afghanistan, Pakistan and India share multiple divided people groups that the British intentionally divided in order to destabilize the region for their own political gain.  Harry interjected that the those national boundaries, drawn by the British were drawn at the same time the dividing lines in Israel were drawn with the same effect: destabilization.  Jan then astutely said, “God’s boundaries are ethnic, not geopolitical.”  He and Harry went on to explain the significance of the reconstitution of Kol Israel according to God’s boundaries, not according to man’s politics.

Harry, previously in his introduction of us as lost tribes scattered through Europe and North America (no other parts of the world were present) had described us as being connected to the Jews through affinity to Torah, so I might modify slightly the comments 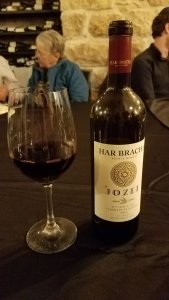 of the two men to understand that God indeed has boundaries, but they are partly heart related, His multi-ethnic Am Israel that adheres to his Torah, and partly ethnic related, per Jan’s summary statement.

Due to the lateness of the hour when Jan and Harry finished, few questions were asked, but a percent of the crowd hung around until all glasses were empty goodbyes said.  Fred gave me a glass of Jozef from Har Bracha that I savored as I mulled the day.

And, it all started with not much of a plan….

4 Responses to Judah and Ephraim Speak!!