The Shema WallWritten Vinyl in my office… (Pics)

A couple weeks ago, I shared the Shema wall vinyl that I had WallWritten.com make for me.  Well, since then, I am guessing they have sold a few, because at least one friend and reader sent me a pic of what is now in his home.  It is posted below.

I had an idea for a blank wall in my office at work that would incorporate the Hebrew text recently placed in large font on the wall of our living room.  Here is a pic of the final product followed by several other related pics. 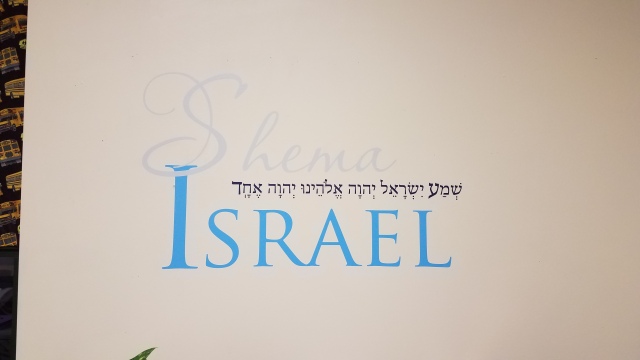 24″ wide by about 15″ high, this vinyl on a visible wall at work will be sure to start a conversation of two. The neat part of the Shema is that like the text in the Torah, this includes the ‘jots’ of the two enlarged letters that, when put together, mean ‘witness.’ Marinate.

Friend and reader, Steve King added a Shema to the wall of his beautiful home.

Before the Shema wall vinyl…

3 Responses to The Shema WallWritten Vinyl in my office… (Pics)