The Star of David

The Star of David, or more appropriately, the Magen David is an unmistakable symbol that is immediately associated with Israel and the Jews, .  Recently, the symbol has drawn fire from a prominent unnamed Messianic ministry that I usually appreciate for their many quality Scripture teachings, however, their recent foray into this symbol has irritated me because it tarnishes their credibility. 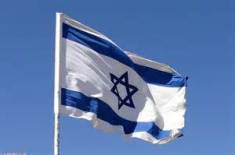 Two days ago, I received a quality email from dear friends in Israel, Ephraim and Rimona Frank, concerning the subject of the Magen David.  I want to share that email followed by a few thoughts.

Regretfully over the past several years subtle anti-Semitism has been creeping into, and growing within the Hebrew Roots movement (being a self-defeating oxymoron). One of these expressions, which directly affects the Jewish people and the State of Israel, is the interpretation or meaning given to the Star of David (the “magen David” as it is called in Hebrew, “the Shield of David”). Among the numerous symbols used in the world there are, for example, the symbols of the written languages, that is the letters, but what renders each of them its meaning?

So let’s view the “Shield of David.” It is made up of two equilateral triangles that were joined together in days of long ago. Later it was used by other people or groups who took to that geometric shape, and may have given it their particular interpretation. But what is a symbol or any given object? In and of itself it has no intrinsic meaning. A five year old could look at the six pointed star and it would mean nothing to him, other than being an object to handle. He could play with it all day and it would still remain a play thing to him. But a parent may come by and tell the child that this star is what King David inscribed on the shields of his mighty men. A little while later another person may come by, declaring to the child that this object, with its particular shape, came from the devil and is very dangerous to look at, or touch. So now the child puts the two together and decides that king David and his mighty men were evil, as would be anyone else who associates himself with this hexagonal shape.

The Scriptures discuss how symbols and objects can become idols. Paul states, “We know that an idol is nothing in the world, and that there is no other Elohim but one” (1 Corinthians 8:4). In other words, it doesn’t matter what we call an object. Even if we attribute to it divine and supernatural characteristics, it is still just an object which cannot give life or anything else, and as such it will never animate itself, as it states: “They have mouths, but they do not speak; eyes they have, but they do not see; they have ears, but they do not hear; nor is there any breath in their mouths. Those who make them are like them; so is everyone who trusts in them” (or attributes any capabilities to them. Psalm 135:16-18 emphasis added).

Hence if man applies his knowledge to that article (Paul called this knowledge “food” given to an idol), and then believes that it can somehow give back to him some kind of edification or information – good or bad – then the object becomes that idol, for good or bad. YHVH further chides Israel for such stupidity:
“He cuts down cedars for himself, and takes the cypress and the oak; He secures it for himself among the trees of the forest. He plants a pine, and the rain nourishes it. 15 Then it shall be for a man to burn, for he will take some of it and warm himself; yes, he kindles it and bakes bread; indeed he makes a god and worships it; he makes it a carved image, and falls down to it. 16 He burns half of it in the fire; with this half he eats meat; he roasts a roast, and is satisfied. He even warms himself and says, ‘Ah! I am warm, I have seen the fire.’ 17 And the rest of it he makes into a god, his carved image. He falls down before it and worships it, prays to it and says, ‘Deliver me, for you are my god!’ 18 They do not know nor understand; for He [YHVH] has shut their eyes, so that they cannot see, and their hearts, so that they cannot understand. 19 And no one considers in his heart, nor is there knowledge nor understanding to say, ’I have burned half of it in the fire, yes, I have also baked bread on its coals; I have roasted meat and eaten it; and shall I make the rest of it an abomination? Shall I fall down before a block of wood?’” (Isaiah 44:14-19, see also Jeremiah 10:1-50).

Astrology is one of those disciplines that attach knowledge to inanimate objects; someone ascribes to the heavenly bodies certain characteristics, making it known to others who, in turn, believe this ‘information’ which originated in that someone’s imagination, or from a spiritual influence exercised upon that imagination.

As mentioned above, Paul calls this knowledge “food” that is offered to an object or symbol (idol), and then goes on to warn his readers not to partake of this so-called knowledge. Nowadays the computer is a case in point. All the source of the knowledge it contains had to originate from man, but it is so easy to forget that fact and ascribe the data it holds, to this technological device. Thankfully we do not worship the computer, although it is possible to become dependent on it and to trust it to the point of being unable to function without it (as if it will “never leave or forsake” us).

All this was in order to bring us back to our original subject. At present some ‘ministries’ are engaged in propagating what Elohim calls “foolishness” (see 1 Cor. 3:19). One, for example, put out a long occultic dissertation on the meaning of the symbol on the flag of Israel, with its associations being akin to the Protocols of the Elders of Zion (a foul and contrived publication that helped fuel the Holocaust).

If I may, I would like to give another definition to that symbol, with a more positive outlook. When David conquered Jerusalem he united the two Israels (the northern tribes with Judah, located in the southern region). But after the reign of Solomon YHVH, in accordance with His word and will, divided the kingdom in two. And so, if we separate the two triangles, as in the diagram on the left, and then rejoin them we come up with a very interesting design and thought. 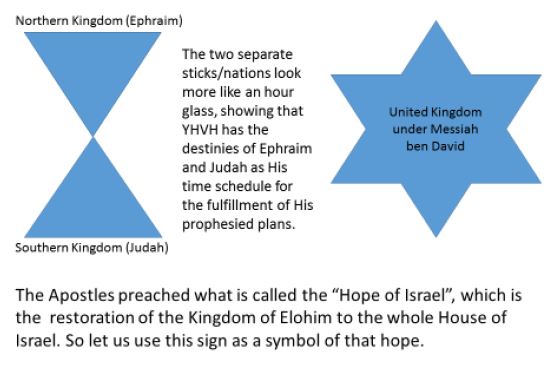 And, lastly, what about this?

I appreciate Ephraim and Rimona chiming in on this important topic, particularly as it breeds a perceived, if not actual, anti-Semitic reaction toward brother Judah.  My personal stand against those who teach against the legitimacy of Israel today, the Jews, and even the Magen David began about a year ago when a friend gave me a star and a chain to wear.  It has been off my neck lest than a few hours since I received it that day.  I wear a Star of David as a show of solidarity with Israel and as a constant reminder of who I am.

I strongly recommend the short article linked above with the beautiful images of nearly 2000 year old artifacts bearing the fish-star of David-menorah symbol.  Apparently the Apostolic fathers didn’t have a problem with this symbol.  Neither do I.

My hope is that each of my readers will consider ways to bless Israel, the nation, and all of her people.  In less than four weeks we board a plane for Israel to celebrate Sukkot IN Jerusalem and participate in the Second B’ney Yosef Congress.  I cannot wait to see that beautiful flag and be surrounded by those wonderful people for 21 glorious days!  And, I am going to be looking for a nice silver Magen David to replace this stainless one.

66 Responses to The Star of David