The Messiah from Assyria??

Prophecy is almost always fulfilled in a very literal manner.  Just read the couple hundred messianic prophecies fulfilled by Yeshua and, though many are couched in idiomatic 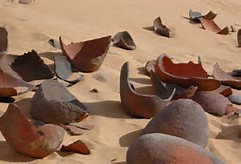 language, the clear literal nature is unavoidable.  Psalm 22 describes His execution in vivid detail, confirmed in the Gospels.

What is particularly fascinating is how most Christian denominations have their own varied interpretations of future prophecies with evident blind spots caused by centuries of layered anti-Semitic doctrine.  The result is that even when literal avenues of fulfillment manifest, they only ‘see’ their own interpretation.  Today, we are marching toward a very literal fulfillment of numerous end times prophecies and, because they don’t fit the Christian expectation, they are flying under the radar.

The two articles are, Is It Time To Reestablish The Davidic Kingdom in Israel? and Messiah Has Arrived, Announced “War of the Worlds” Style Radio Program.  Author Berkowitz shares with us the exploding Jewish expectation for an imminent appearance of the Messiah, a sentiment I have personally witnessed in various other places.  Truly, these are heady days, but they are also days that we must be on very careful guard!!

Both of these articles caused in me an excitement, but each also presented a large red flag!!  Read the articles and Al’s comments before proceeding so the rest of this post makes sense…

Most people, Jews included, do not know their Bible very well.  And, even fewer, are very familiar with the minor prophets, as if there is such a thing as a ‘minor’ prophet.  😉

The first article listed touches well on the literalness of the coming Messianic fulfillment with the Son of David on the throne.  What is incredible is that there are some who actually have verifiable lineage to David.  What blew me away is that the lineage runs through Syria!!  The words ‘Aleppo, Syria’ lept off of the page at me when I read that article!  Anybody read Micah 5 lately?  The anti-messiah is Assyrian!

Every Christian is familiar with Micah 5:2, but they stop reading by verse four and never get to the heart of the future duty of the Messiah, namely – defeating the Assyrian that has invaded the Land.  Here, before our doctrinally fogged eyes is a scenario that is not only plausible, but lines up pretty nicely with ‘Assyrian,’ ‘deception,’ ‘anti-messiah,’ etc. Interesting.

This leads us directly to the second article.  Increasing expectations are so high that a ‘War of the Worlds’ type of drama as news report of the Messiah’s arrival caused quite a stir in Jerusalem.  My thoughts immediately went to Matthew 24:24-28 and Yeshua’s warning against chasing reports.  Rather, we are clearly told what the event of His coming will look like.  Acts 1:11, Revelation 19:11-19, Zechariah 12-14 and others all present prophecy with connecting details that help assemble the whole picture of One who shows up on the Mount of Olives during Israel’s greatest time of need.  He will not grow up among the people, nor will He be merely a great human warrior/leader, rather Melek Yisrael will return as He left on several occasions.

All told, the lessons here are that prophecy will be fulfilled literally, therefore, we had better know our Scriptures inside and out while also relying on the Ruach (Spirit) to be our guide.  Sadly, many will do neither and will be misled.