‘The Lord’s Supper’ : A tradition of men?

I was raised in Christendom and later attended seminary and was ordained as a pastor in a Presbyterian denomination.  One of the highlights of worship in Christendom is ‘The 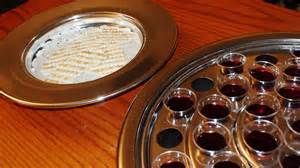 Lord’s Supper’ or ‘Communion,’ served quarterly in some churches, more frequently in others.

A recent question concerning my faith was posed asking if our fellowship observed ‘the Lord’s Supper to remember Christ’s sufficient work to pay for our sins.’ While the question is multifaceted in that it has underlying questions about the sufficiency of Messiah and implied questions concerning the place of ‘working out our salvation with fear and trembling,’ I have been pondering the Christian tradition of the ‘Lord’s Supper.’  Is the normal praxis of Christendom with bread and wine defensible or even found in Scripture?  Or, is it a tradition with little basis in Scripture and more a compilation of tradition and ‘feel good’ memories that may seem worshipful, but do not meet the expectations of a Holy God with clear instructions?

Tough, tough questions, but worth exploring!

Having led / performed 60-80 Communion services (our church practice while I was in the pulpit was quarterly observance) I’ll try to shed some light on this touchy subject.

One of the very central passages of Scripture that often begins the observance is,

23 For I received from the Lord that which I also delivered to you, that the Lord Jesus in the night in which He was betrayed took bread; 24 and when He had given thanks, He broke it and said, “This is My body, which is for you; do this in remembrance of Me.” 25 In the same way He took the cup also after supper, saying, “This cup is the new covenant in My blood; do this, as often as you drink it, in remembrance of Me.” 26 For as often as you eat this bread and drink the cup, you proclaim the Lord’s death until He comes.

A major, yet often overlooked, clue connecting Paul’s explanation with Biblical context is the little phrase ‘in the night in which He was betrayed…’

What was Jesus doing ‘in the night in which He was betrayed‘ that involved bread and wine?

Glad you thought to ask….

18 And He said, “Go into the city to a certain man, and say to him, ‘The Teacher says, “My time is near; I am to keep the Passover at your house with My disciples.”’” 19 The disciples did as Jesus had directed them; and they prepared the Passover.

And, it was at that meal that the Messiah said,

26 While they were eating, Jesus took some bread, and after a blessing, He broke it and gave it to the disciples, and said, “Take, eat; this is My body.” 27 And when He had taken a cup and given thanks, He gave it to them, saying, “Drink from it, all of you; 28 for this is My blood of the covenant, which is poured out for many for forgiveness of sins. 29 But I say to you, I will not drink of this fruit of the vine from now on until that day when I drink it new with you in My Father’s kingdom.”

But of course!!  They were celebrating Passover!

What many in Christendom are not aware of is that Scripture says at least four times that Passover is to be observed ‘forever/perpetually/throughout your generations,’ etc…  (See Exodus 12:14, 24, 42; 13:10 and Lev. 23:14)  Yeshua (Jesus), who by His own mouth said ‘not one jot or tittle will pass from the Law and the prophets until heaven and earth pass away,’ was simply being obedient to Scripture and deepening the meaning of this mandated annual feast.  He was NOT adding to or changing the Torah, because to do so would be sin and would immediately disqualify Him as the spotless Lamb!

Deu. 12:28 “Be careful to listen to all these words which I command you, so that it may be well with you and your sons after you forever, for you will be doing what is good and right in the sight of the Lord your God….32 “Everything I command you, you shall be careful to do; you shall not add to nor take away from it.

Paul affirms this understanding of Passover in the I Corinthians 5:7-8 when he says,

7 Clean out the old leaven so that you may be a new lump, just as you are in fact unleavened. For Christ our Passover also has been sacrificed. 8 Therefore let us celebrate the feast, not with old leaven, nor with the leaven of malice and wickedness, but with the unleavened bread of sincerity and truth.

While Paul affirms the spiritual dimension of Passover as worship, he in no way undermines the physical keeping of God’s perfect instructions in righteousness.  In fact, his example in Acts is of keeping Passover!  (See Acts 20:6)

Conversely, there is no evidence, ZERO, ZILCH, NADA of any other form of observance involving bread and wine that displaces Passover.  I do not have time to fully research the traditional practice of a crumb of bread and thimble full of wine, but if I were a betting man, even before looking any deeper, I would happily gamble everything I own against the understanding that Christian ‘Communion’ has no basis in Biblical practice.  Rather, I can assure you that you’d find that the practice, while seeming to be rooted in Scripture, was actually developed years later as part of the divorce of Christendom from her Hebraic, even decidedly Jewish, roots.

This is a very tough thought to ponder.  Seriously.

Scripture commands that we tear down, even destroy, idols and places of false worship.  Christendom’s ‘Lord’s Supper’ is just that, a false worship, even idol that is divorced from Scripture.

I know this has challenged some of my readers….  Don’t shoot the messenger.  Get out your Bibles and ask God to remove any blinders or traditions and just show you Truth. He will show you Truth and likely will even be gentle, though the initial stripping away is not easy…  It may be painful.

Details in 'About' page @ natsab.wordpress.com Basically, husband of one, father of four. Pastor x 11 years, former business and military background. Micro-farmer. Messianic believer in Yeshua haMashiach!
View all posts by Pete Rambo →
This entry was posted in A Thought..., Debate/Discussion and tagged bread wine, communion, Passover, praxis, The Lord's Supper, traditions of men. Bookmark the permalink.

35 Responses to ‘The Lord’s Supper’ : A tradition of men?