Antisemitism on the Rise… **updated**

An update via email is now added to the end.  Per the email’s requests, some information has been redacted from the original post.  I personally know a number of people who took the time to write this school expressing concern.  I suspect that our contact with them at least partly helped to expose something we all must guard against.

In the last 24 hours I’ve been made aware of several recent instances of antisemitism.  I’ll share one in a minute with pictures, etc.

As I checked some of my favorite blogs, Peter, at the Orthodox Messianic Blog, explains what appears to be another instance.  Indeed, are we seeing history repeat?  Here is a good video asking that very question with clear examples of this very dangerous growing trend.

Hating the Jews IS hating the Messiah!  Period!!  He is (not, was) a Jew.  Torah-teaching, Sabbath-keeping, Feast-observing, tassel-wearing, Jew.  Even today at this very moment!  No one who believes in the Messiah or in Scripture can hate the Jews.

Now, one case I received in my email:  (Name of original recipient redacted, otherwise, email reprinted in its entirety with pictures inserted)

Excerpt from the email forwarding this to me:

[We received the below email today, from a pastor by the name of [redacted**], who lives in [redacted**].  He noticed an anti-Semitic sign posted in the [redacted**] High School. He addressed it to the staff, and was told that they would not remove the sign.  He further pursued to get this rectified to no avail.  They basically stonewalled him, making him feel helpless to get this corrected. This is a total outrage and unacceptable (especially seeing how we are Messianic Jews ourselves, who also live here in [redacted**])! ]

I am hoping this is still your regular email.  I wanted to clue you in on an issue at [redacted**] Public School.  Perhaps I should have done so earlier.  My reason for saying so will be evident in a moment.

I went to the school a few weeks back (this was the week during the Yom Ha Shoah) to address an issue where my daughter was not well cared for at a school event out of town.  I needed to return the next day for a follow up.  The second day I saw something I missed the day before.  It was a poster, hand drawn with an Anti-Semitic sentiment. 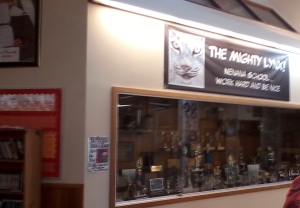 The poster read in part:

“Rid Our World of Pests”

“The Jew is our Misfortune” (this line was in German)

I caused a scene.  I was extremely upset.  The administration didn’t make me feel any better.

I was told the posters were how the middle school was learning about WWII.  The students were directed to make 2 posters with propaganda one from an Axis and one from an Allies perspective.  The student teacher conceived of the idea.  The teacher approved it.  To hang them in the hallways, the principal also approved it.  All three people told me they had in fact approved of the posters.

I was given an “I’m sorry you are offended” apology.  They took that poster down temporarily, but showed many of them at an evening community event.

I have been told I am the only person who was offended.  I have since discovered many people were upset including teachers.  The administration also lied to me when I asked about others who were offended.  They said no one when in fact I was not the first person to take issue.

I am not convinced that they have taken any responsibility for the wrongdoing.  They have not properly apologized to me or others nor instructed the teachers to avoid such tactics or the students that such is wrong as far as I can tell anyway.

I have approached the school board.  I received a lukewarm response.  The board member agrees the signs were in poor taste, but sees no reason to press the issue and they feel like its pointless to hold the teachers accountable.  The board member is overworked and feels taxed to the breaking point.  An issue like this is a major issue and they are not sure if they have the time or energy to effect change.

I feel like I am being ignored since my kids are homeschooled except for music, but we go through CyberLynx which is part of this school district.

I am not sure what outcome I desire.  But the school should at least admit the lesson was a mistake and retrain the teachers on what is acceptable.

I have also contacted the Jewish Anti-Defamation League.  I am awaiting their contact.

Since I have not been able to effect change as a solitary parent, I am sharing this with your family since I believe you are the most affected by such signs and posters.  Several pastors in town are willing to stand against this, but the school and school board evidently need to feel the pressure of the parents who are unhappy with this.

Sorry for writing such a long email.  I am attaching photos of the poster so you can see it is real and where it was hung in the school.  I am asking that if this is offensive to you and your family, then the school needs to feel the pressure to make this right.

Please note, these photos are offensive.  The message is hateful and wrong.  But it is proof of what was posted.  I have thought of sending them to the newspaper, but fear escalating this too far too fast.

Edit:  Note, you can contact [redacted**] School at this link: removed

It is my understanding, the ACLJ is considering this case, but we can not stand by and watch.  It is incumbent upon all who believe in the Jewish Messiah, Jesus/Yeshua, to speak out vociferously against antisemitism.

To its everlasting shame, the ‘church’ largely did NOTHING during the Holocaust.  There were a few who stood against the tide of death, but most not only stood silent, many helped!!  (There are accounts of German guards taking a break on Sundays so they could gather for a sermon and sing hymns, before returning to the fires of the ovens!!)

Multiple times we have addressed the topics of antisemitism here, and I request that you read and refresh!  Be aware!  Speak up!  Pass this along to alert and wake people.

Division is coming.  Where will you stand?

Here is where I used to stand: RT: Antisemitism!

I am writing in regards to the May 20 blog post on anti-Semitism.  I am the author of the email posted as a quote.

I have met again with the school board member mentioned in the email.  She pointed out some areas of clarification.  I did not intend to misrepresent her and so am trying to make this right.

1.  I spoke with her as a board member, but did not go before the board.
2.  When I mentioned she believed the posters to be in poor taste, she clarified that she felt the offense and understood why the poster is offensive.
3.  She always intended to devote any necessary time and energy to this issue

The board member is now moving toward a satisfactory conclusion that includes a plan to accurately teach the evils of the Holocaust.  The member is a person of integrity who is pursuing a right and true course of action.

Because of this effort, would you please redact the name of the school and its contact information?

Also, you redacted the name of the person who sent you the email, but left my name intact.  I am requesting that my name be redacted as well.

I make no demand, but hope that my request leads to these redactions.

10 Responses to Antisemitism on the Rise… **updated**

American Homeschooling Family Reporting From the Land of the Bible