Admittedly, theology is particularly hard to boil into modern culture’s penchant for ‘sound bytes.’  Generally, they do not turn into sound theological bites. 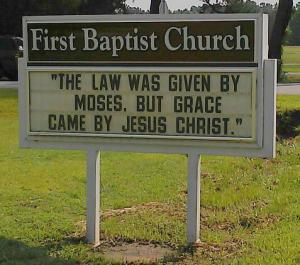 Recently, a church very close to the fellowship I help lead had some interesting material on their sign.

Maybe I’m hypersensitive to perceived attacks on those who would follow Torah, or maybe my conversation with their pastor leads me to believe he is aiming the sign at us…

I am new in this community and when he ran into me at the post office we had normal pleasantries before he asked about where I went to church.  When I said that I lead the Messianic fellowship down the road he offered three very interesting observations. 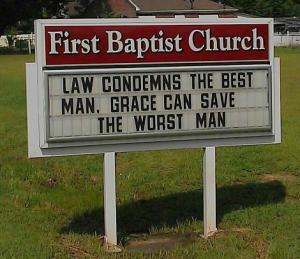 So when the two sides of his church sign had the posted statements, I couldn’t help but wonder if they were at least partly precipitated by our conversation.

Taken individually, on face value, both of these statements are true, however, the implied underlying theology is errant.  Particularly when, like two sides of the same coin, they are presented in tandem as the photo evidences.

My hope is to have lunch and build a relationship with this pastor, so instead of assuming what he was implying, I want to zoom out to a broader focus of the church at large and the error they teach, nearly perfectly portrayed in these theological sound bytes.

The church generally does exactly what this sign demonstrates.  It pits Law and Grace against each other with the continual mantras that,

And, that is FALSE!!

Unraveling the Gordian knot of 1700 years of false Christian doctrine will require a longer post than I have time to write, but just a few thoughts and Scriptures can quickly help us sever major connectors that leave the ‘Grace v. Law’ idea in shambles.  Consider:

Simply, the Law/Torah, stands.  Grace is null and void without it.  Further, Grace doesn’t free us from the Law, it frees us TO the Law.  We are freed from past sin to walk in obedience TO the LAW!  When we fail, we have Grace to pick up and again be obedient.  We do not, by Grace, have license to be Lawless.

A closing note, before I get fired up…  LOL!

Salvation does NOT come by works of the Law.  It comes by Grace so that we can be obedient TO the Law.  In keeping the Law is great reward!!  The Law is life!!  (Which reminds me…  time to do the third post in that series…  )

I pray this post has challenged and encouraged you to look beyond ‘sound byte’ theology and dig into the Word of Yahweh!!