Solomon and the baby… today! 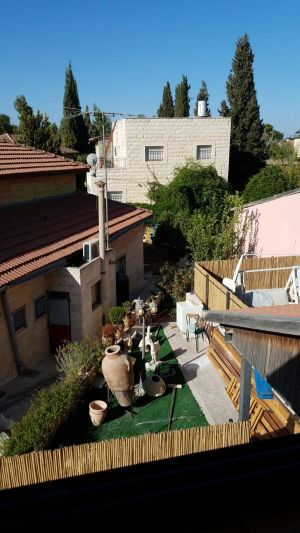 I woke with a jolt, realizing that I did not know where I was. The sheets and pillow felt different in the darkened room.  The sounds were all wrong. I lay motionless, frozen, waiting for the fog to lift from my mind as my eyes glanced around the room in an attempt to orient myself.

At the same time, strangely, the story of Solomon, the two harlots and the baby was playing in the corners of my awareness. Slowly, I began to recall my surroundings.  Kelly and I had fallen into bed exhausted the night before from hours of travel and late arrival at Tzemach’s guest house in Giv’at Ye’arim, Israel.  It was Shabbat morning and we were again in the Land of the Patriarchs!

But, why Solomon? I pondered before slowly getting out of bed to stand on the outer porch with a cup of hot tea to listen to the birds as the sun climbed higher in the sky.  I had been considering the whole division of the baby a week earlier, but it seemed an odd thing to wake thinking about.  I pushed it to the back of my mind with the excitement of the day.

I Kings 3:16 Then two women who were harlots came to the king and stood before him. 17 The one woman said, “Oh, my lord, this woman and I live in the same house; and I gave birth to a child while she was in the house. 18 It happened on the third day after I gave birth, that this woman also gave birth to a child, and we were together. There was no stranger with us in the house, only the two of us in the house. 19 This woman’s son died in the night, because she lay on it. 20 So she arose in the middle of the night and took my son from beside me while your maidservant slept, and laid him in her bosom, and laid her dead son in my bosom. 21 When I rose in the morning to nurse my son, behold, he was dead; but when I looked at him carefully in the morning, behold, he was not my son, whom I had borne.” 22 Then the other woman said, “No! For the living one is my son, and the dead one is your son.” But the first woman said, “No! For the dead one is your son, and the living one is my son.” Thus they spoke before the king.

We enjoyed a different sort of Shabbat at the behest of our host.

The next morning, team members of the recent Ani Yosef Sukkot Trip began to arrive. Among the first were members of the leadership, Andrea and Pieter Hoogendoorn, from the Netherlands. We have spent much time planning this trip and share the same vision for connecting with Judah through service. They excitedly relayed that they had arrived in the Land prior to Shabbat and stayed in an AirBnB house in Jerusalem.  When their hostess asked their reason for visiting Jerusalem they explained that they were helping lead a team coming for the Feasts, but also were going to be picking up trash as a service to the Land and Judah. Their hostess, Kim, immediately exclaimed, “You must meet Inon! He organizes trash pick-up in Jerusalem.” They asked questions which led to Kim giving Inon’s web address and making a phone call to try to put us together.

As Andrea related this story, I just shook my head in amazement.  Abba is so good!  For months I had been trying to establish contact with anyone in Israel that could help us connect with and get permission to pick up trash.  Our host, Tzemach had been trying to do the same.  I had connected with Jordan Marcellino, the founder and director of The Beautiful Land Initiative, but he is focused around Tiberius and was not ready to extend himself into Jerusalem. Tzemach’s contacts in Jerusalem, even among the municipal government, had turned up empty.  As Tzemach recommended, everyone he spoke with liked and encouraged the idea, but nobody wanted the liability, so instead of permission he was assured we would have blind eyes.  I mean, who is going to stop a bunch of crazy non-Jews from picking up trash, right?

So, the potential to work with Inon was an interesting new connection from Abba. We combed his website for insight into his mind and purpose while hunting for contact information.  My interest snapped sharply to excitement when I read this on his site, www.the-home.org: 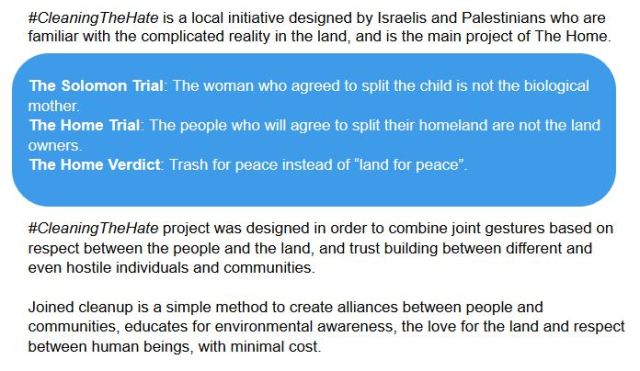 Solomon! And, connections with a number of hot buttons for me…  Cleaning, respect, trust, the Land, Israelis, Palestinians, bridge building!!  Really?!?  We HAD to meet this guy and see if he was for real!

As it happened, we were not able to get together with Inon until after our second day cleaning.  As Tzemach advised, we simply went into Jerusalem and began picking up trash to the supportive comments and gestures of all, including the municipal workers that we came across.  We witnessed the incredible power of servanthood and felt the deep satisfaction of doing so simple a task that was inexplicably meaningful. 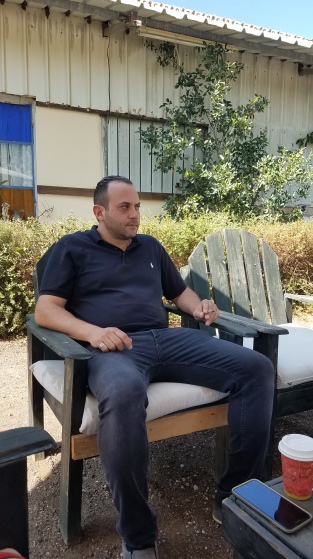 Giv’at Ye’arim and excitedly related that Inon was enroute to stop and see us on his way to Tel Aviv for Yom Kippur. We waited with great anticipation.

Upon his arrival, we served some fruit and water while listening to him tell his story and how he came to see trash as a vehicle for peace. Woven into his concern for the Land and the people, both Jew and Palestinian, Inon related his thoughts on Solomon and the dividing of the baby.

23 Then the king said, “The one says, ‘This is my son who is living, and your son is the dead one’; and the other says, ‘No! For your son is the dead one, and my son is the living one.’” 24 The king said, “Get me a sword.” So they brought a sword before the king. 25 The king said, “Divide the living child in two, and give half to the one and half to the other.” 26 Then the woman whose child was the living one spoke to the king, for she was deeply stirred over her son and said, “Oh, my lord, give her the living child, and by no means kill him.” But the other said, “He shall be neither mine nor yours; divide him!” 27 Then the king said, “Give the first woman the living child, and by no means kill him. She is his mother.” 28 When all Israel heard of the judgment which the king had handed down, they feared the king, for they saw that the wisdom of God was in him to administer justice.

According to Inon, the Land is the baby. All who seek to divide it, whether Jew, Palestinian, Christian, rich, poor, politician, etc, are not the rightful inheritors.  Those who will love and care for the Land, those who seek its unity, those who will walk in humility and service prove that they are the ones who belong in the Land.

My eyeballs began to sweat… 😉

He asked my story and motivation.  I began with explaining that our vision is to be a blessing to the Jews and help take care of “your Land.”  He cut me off and quickly explained, “This is not Jewish Land, it belongs to Hashem!”

I continued with something about believing that we are part of Israel and he again cut me off in typical Israeli directness, “Who do you think Israel is?”

Caught off guard, I stammered something about the two sticks and again, he jumped in, “Exactly right! Israel is more than the Jews.  It is anyone who wants to be a part of Am Israel (the people of Israel) and is willing to work together in peace and unity.”

Then, he was off and running! Inon began to explain that his understanding from Tanak is that all, including Palestinians and other non-Jews, who desire to walk in peace and be a blessing while living in unity are welcome. He articulated a very clear vision for a one state solution that begins with picking up trash and the humility required by all parties.  In doing so, we demonstrate mutual respect and ‘care for the baby.’  All, according to Inon, who seek to divide the state, are not the rightful owners.

He then shared his logo and explained the colors and parts.  As I best recall, the Land, represented by the green, belongs to Hashem. Judah, in blue, has sovereignty as the head. The ‘body,’ in white, is the Shomron, Samaria, and all her people.  Clearly absent from the stylized map is a giant bite out eastern border commonly known as the disputed ‘West Bank.’  He was again very clear that the people of the Land are inclusive of all who come, Jew or non- who are willing to walk in peace in a one state solution under the rightful headship of Judah.

Again, my eyeballs were sweating, tears that Inon was sharing at that very moment.

In this visionary, I found an ally. He was telling me about my own thoughts without mincing words, thoughts that I had expressed two months earlier on this blog to some sharp rebuke and repercussion.

As our visit began to wrap up, Inon explained that he wants to connect with Ani Yosef and schedule some clean-ups on our future trips that team us up with Jews and Palestinians, working together, then sharing fellowship over coffee.  Mmmm!  Count me in!  Win-win-coffee…

And, another older video from The-Home’s YouTube channel… Love this video…

Trash becomes a vehicle and a litmus test.  Hmmm…

We look forward to working with Inon and The Home on future trips to Israel.

Ani Yosef has multiple trips in various stages of planning.  If this is something that interests you, please follow that blog so you get email notifications of updates and upcoming opportunities to visit Israel and serve!

6 Responses to Solomon and the baby… today!