Over the course of the last six months, Al McCarn and I have been co-authoring a book, Ten Parts in the King, that is about to be published.  We really had most of the book 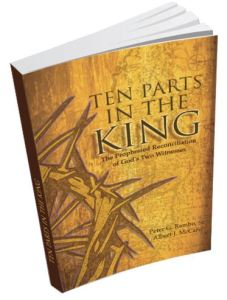 finished within two months of starting, but have sensed Abba guiding us toward refining the text and insuring the tone is right and compassionately humble.  Part of His guidance toward that end, He has led us to place the manuscript before a number of persons from a broad background, both Christian and Jewish, for input, review and feedback.

One such reviewer invited us to middle Tennessee last weekend for a Sunday morning interview to be edited into two segments for her international ministry’s online video program.  While details and links to this upcoming program will be released at the appropriate time, I tell you that to give the background for why we were there and something special the Father showed us.

Because we did not want to travel on Shabbat for the early Sunday interview, we reached out to friends, Eddie and Wendy, who graciously hosted us.  Friday evening and all of Shabbat were wonderfully full of deep and thoughtful discussion about myriad topics, though the subject matter of the book remained central.  Shabbat afternoon as we sat with them and another couple, Dean and Karen, under their back porch sukkah, our discussion again went to Ten Parts in the King and the details of the division between the House of Israel and the House of Judah.  Then, as we dug deeper than the scope of the book, we were surprised by tears.

Ten Parts in the King is subtitled, The Prophesied Reconciliation of God’s Two Witnesses.  In it, Al and I build a case from Scripture, history and the Jewish Sages for God’s revealed plan and purposes in dividing the House of Jacob, their respective missions in the earth, and His prophesied reconciliation.  The central story and central verse in all of Scripture as we articulate in the book, is I Kings 12:19.

So (the house of) Israel has been in rebellion against the House of David to this day.

As we read and discussed I Kings 11 and 12, we began to discuss the reasons the House of Israel was seeking relief from Rehoboam, something I had only lightly considered before.  Solomon’s Kingdom is regarded as the height of kol (all) Israel’s glory, and I have long held it in high regard, however my thoughts took a turn as we considered how the kingdom reached its zenith.

A study of 1 Kings 4 reveals that Solomon divided his Kingdom into 12 regions that sent tribute up in their assigned months to support his burgeoning household and his excesses.  Interestingly, as Charles River Editors state in The Ten Lost Tribes,

The final text that shows a distinct list of 12 tribes is the articulation of the 12 administrative districts established by Solomon in the 10th century BCE (I Kgs. 4:7-19).  As with the Song of Deborah, these 12 districts were confined to the northern portion of the nation, which would eventually secede to form Israel….   …this suggests that these 12 districts were established in order for Solomon to maintain control over these tribes and prevent any type of rebellion from a group that did not necessarily identify with Judah….the northern tribes felt exploited by the Judean kings.

Remarkably, Judah is not listed among those taxed.

The tribute seemed a small thing in previous readings, but as Al read under the sukkah, I began to feel inexplicable anger, rejection and hurt.

gallon drums] and sixty kors of meal, 23 ten fat oxen, twenty pasture-fed oxen, a hundred sheep besides deer, gazelles, roebucks, and fattened fowl. …6 Solomon had 40,000 stalls of horses for his chariots, and 12,000 horsemen. 27 Those deputies provided for King Solomon and all who came to King Solomon’s table, each in his month; they left nothing lacking. 28 They also brought barley and straw for the horses and swift steeds to the place where it should be, each according to his charge.

What we infer from this is that Solomon was building a dynasty, and he was doing it on the backs of all who were not of Judah.  Presumably, under the influence of his Egyptian wife and his Egyptian ties (1 Kings 3:1-2), he was progressively enslaving Israel.  Imagine the volume of this tribute to feed and entertain his hundreds of wives, children and government officials.

But, that wasn’t enough!!

Solomon also conscripted forced laborers (1 Kings 5:13-18), the majority (if not all) of which came from tribes other than Judah.

As we sat and read these facts from Scripture my gut began to twist in a way I had not felt before.  I suddenly realized that men and boys, forced to contribute to this heavy tribute, were also being taken from their family farms and businesses and made to work as stone cutters and transporters of timber and stones.  The northern kingdom had been reduced to slaves at the hand of the son of David.

Is it any wonder that when Rehoboam went to Shechem to secure the allegiance of the northern tribes that they rebelled upon hearing his proclamation that he would rule even more harshly than his father? In that proclamation, Rehoboam said:

This should sound familiar. When Moses and Aaron asked Pharaoh to let the people go from Egypt, his order to have the Hebrews make bricks without straw included these words:

“Let the labor be heavier on the men, and let them work at it so that they will pay no attention to false words.” (Exodus 5:9)

(It is instructive to note that the rebellion was NOT against Judah, but against the house of David!)

Anger and hurt, rejection and pain welled up in me as I realized that we, the House of Israel, were abused at the hand of Solomon, our king.  My fathers paid a heavy price for Solomon’s glory.  And, tears began to flow – my tears and those I saw in the eyes of the others before I even shared my thoughts.  The weight of the implications had hit us all almost simultaneously.

We proceeded to discuss how Solomon’s sin of subjugating us was then repeated by us in the cultures we were dispersed into.  The sins of our father Solomon were carried to and through the nations even to this day.  We pondered many cultures and their destructive policies that were repeated through the centuries, and we recognized that today, American policies in foreign cultures have a root in the repeated sin of Solomon.  (In sharing these things with the Sukkot gathering at Elijah Clark State Park on Simchat Torah, David Covert made the astute observation that spiritual abuse and overlording in the Church has exactly the same root and has come to us through our fathers in the same way!!!)

As we shed these tears we became aware that we needed to spend some time in prayer and repentance, forgiving and releasing our fathers and Solomon from their sin against us and other cultures.  We prayed forgiveness for the rejection of Judah and his scepter by our fathers and by us. Even though Judah wielded the scepter in a manner that lorded it over us and hurt us and our fathers, the rejection is the root of the jealousy we have harbored against Judah (the Jewish people) ever since (Isaiah 11:13).

As we finished praying and releasing these burdens from ourselves and our progeny, Al shared another layer to the words of another Son of David who said,

“Come unto Me, all who are weary and heavy-laden, and I will give you rest.  Take My yoke upon you and learn from Me, for I am gentle and humble in heart, and you will find rest for your souls.  For My yoke is easy and My burden is light.” (Matt. 11:28-30)

Yeshua, the Son of David, was making a clear reversal of Rehoboam’s tragic promise to judge more harshly than Solomon.  Again, we were choked up!  Our King is a good Shepherd, a Servant King, who will not pasture Himself upon His flock.

In coming as He did, Yeshua was forgiving our rebellion against the Throne of David and forgiving us for our rejection of Davidic authority.  When we proclaim Him as our Messiah, we restore, by faith, our allegiance to the house of David and the Son of David.

Details in 'About' page @ natsab.wordpress.com Basically, husband of one, father of four. Pastor x 11 years, former business and military background. Micro-farmer. Messianic believer in Yeshua haMashiach!
View all posts by Pete Rambo →
This entry was posted in A Thought... and tagged Egypt, lost tribes of Israel, restoration, slavery, Solomon, Ten Parts in the King. Bookmark the permalink.

5 Responses to Surprised by tears….