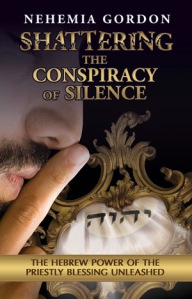 I’m only two-thirds of the way through Nehemia Gordon’s Shattering the Conspiracy of Silence, and I could wait no longer to recommend this very enjoyable book.

In powerfully enthralling fashion, Nehemia deftly exposes and relays truth after truth.  It is at once a terrific story and a masterful explaining of his years of research culminating in the shattering of a conspiracy of silence, concerning the name of Yehovah!

Each chapter has profound lessons masterfully woven into the fabric of a true life adventure.

Kumisi was saying that blindly accepting what someone says in matters of faith turns that person’s words into an idol.  Instead of worshipping God based on what God said in Scripture, you end up worshipping God based on what men have said.  Even if those men happen t be right in their understanding of Scripture , you’ve set them up as intermediary between you and God.  That’s exactly what an idol is, an intermediary that people worship instead of directly worshipping God. (p.106)

Lessons clearly touch error in both Judaism and in Christianity, and Gordon attacks the idol of ‘tradition’ head-on.

“Tradition is what men expect us to do, not what God expects of us.  God expects us to show our love for Him by keeping His commandments, not by following our own man-made traditions.  Confusing tradition with the commandments of God turns it into what the prophet Isaiah called “a commandment of men learned by rote.” (Is. 29:13)  (p.101)

One major point he addresses eloquently is proper pronunciation and the use or misuse of ‘other’ names.  Nehemia’s position is both compassionate and Scriptural…  something every Torah ‘terrorist’ needs to read and process.  The bottom-line,

I have multiple personal favorite quotes including,

As long as I could tell God I was following the words of His prophets, I didn’t mind being at odds with generations of learned rabbis. (p.99)  [My note in the margin: Same with Church ‘fathers’]

A special joy thus far is the number of Scriptures he reveals and elucidates, many verses I have never seen before! Numerous times he opens glorious portals to see wondrous things within the Law and the Prophets.

I highly recommend this book as a fairly fast but enthralling read that has enough meat to be slowly mulled should you read it again.  Unfortunately, my copy heads out on loan tomorrow and I am already looking forward to getting it back! ;o)

5 Responses to Book Review: Shattering the Conspiracy of Silence