The Proper Role of Grace in the Life of the Believer

When I was growing up, there were two boys who lived up the street that I was at least mildly jealous of.  They were from two different and unrelated families, but their circumstances were similar, such that I was envious of both.

My parents loved us (my siblings and me) and provided as best they could, but we were not affluent by any stretch.  Our home was a solid Bible believing home and we had rules and consequences.  I knew deeply that my father loved me, and on more than one occasion I felt the ‘rod of discipline.’

The boys up the street also lived in homes with parents who loved them, however, the environment was a bit different…  It was the environment that at times made me jealous.

Most glaring was the number and types of toys they each had.  Who doesn’t want a motorcycle?  And toys to no end?  They always had the newest, coolest goodies.

Besides the toys, they got to do just about whatever they wanted.  Oh, there were rules, but they knew, no matter what, that if they broke the rules, their dads (and moms) would let it slide, or even take up for them before whatever authority.  Problems at school?  Not to worry!  It was a classmate’s fault, or the teacher’s fault…  If the principal imposed consequences, the parents would make life into ‘easy street.’

There were no curfews.  No real restrictions.  Free access to vehicles, etc…

Yep, they sure had it made.

Or so I thought…

Now, this is a very small sample, but I can tell you, both boys wound up in prison.  In fact, both have served multiple sentences.  I think their combined time in the ‘big house’ is nearly 40 years.  40 years!!

Now, I think of all the freedom I’ve had during those years and I am thankful that my parents had a proper understanding of grace and law.

There are a few lessons here that we can learn.

As a Messianic believer in Yeshua, and one who keeps the Torah, to best of my abilities, I am often accused, or it is often assumed that I either do not understand grace, or worse, that I have somehow spurned the grace by which I am saved.  While both of those accusations are utterly false, I understand where they come from.

The general understanding in Christendom of the work of Christ and His shed blood is that He ‘did away with the Law.’  Common vernacular is to say, ‘we’ve been set free!’  This concept is based on a false dichotomy pitting grace against law when in fact, grace cannot exist independent of the Law.  It can’t!

If there is no law, then it is impossible to even have grace!  So, those who think they can separate the two need to take a step back and reconsider the relationship between law and grace.

Even the most ardent ‘grace’ believer, when pressed, will agree that adultery is sin.  They understand that at least parts of the Law still stand and have authority.  Where the disconnect begins to occur is understanding what the role of grace has in their life.

In the opening of the post I mentioned the true story of two boys up the street from me.  Those boys understood that there were rules, even in their home.  What they and their parents misunderstood was the role of grace.

In their homes, grace was meted out in such a way that it led to license.  The boys knew that no matter how bad they were, dad (or mom) would forgive and apply, at most, a very soft slap on the wrist.  Their ‘sonship’ was never in question and they assumed all would always be forgiven and thus they could do whatever they wanted.  They became lawless!

Christendom today, through a complete misunderstanding and misapplication of the role of grace are doing, or have done, much the same thing.

As such, we have a monstrous ship on our hands that must be turned back toward the Law, and for even mentioning the Law, “I am often accused, or it is often assumed that I either do not understand grace, or worse, that I have somehow spurned the grace by which I am saved.”

Well, here is the Cliff Notes version of the role of grace in the believer’s life:

Law: Does not save us, but IS the instruction manual on how to rightly love God and man.

Grace: Opens the door to salvation and picks us up when we fail at keeping the Law, however, it does NOT free us from the Law.  It only pays the price for the sin.

What did Messiah’s blood save us from?  The Law?  Or, did it save us from the penalty of the Law?

Yes!  It saved us from the penalty of the Law.  The Law still stands!

If we are saved by grace through faith, then does that give us license to do whatever the ____ we want to do?  Heavens, NO!!!

Do we then nullify the Law through faith? May it never be! On the contrary, we establish the Law.  Romans 3:31

Let those words sink in!  We ESTABLISH the Law!!

In fact, all Pauline writings as well as his own actions as recorded in Acts support this.  Only when he is twisted or taken out of context do we arrive at a ‘lawless’ Gospel.

Grace is to be the safety net below the high-wire. 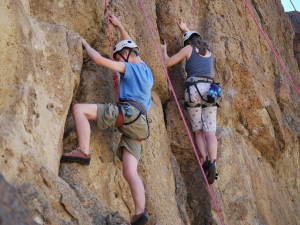 Grace is the rope we are clipped to as we scale the mountain face.

Grace is the life preserver we wear while paddling across a great lake.

It only catches us when we err.

Much of this blog focuses on recapturing the right understanding of what it means to ‘love the Lord your God with all your heart and all your soul and with all your mind and your neighbor as yourself.’

What are we REALLY called to do?  What was the praxis of first century believers in Yeshua?  How did Peter, James, John, even Paul actually walk?  What was their practice and what did they mean when they said, ‘walk as He walked?’

Simple.  They kept the Law and had grace when they failed.

That is the proper role of grace in the lives of believers.

Admittedly, I don’t spend a lot of time discussing ‘grace’ because it has been over discussed and abused by Christendom.  Like the parents of those two boys, it has led to a lawless body of believers that actually think parts of God’s everlasting Law have been ‘done away with.’  A quick search on this site of ‘grace,‘ though, will turn up a lot of hits….  I haven’t ignored the topic.

In closing, here is a video sure to make you think.

Yahweh brought the children of Israel out of Egypt (out of bondage) by grace, then, in His grace, He brought them to Mt. Sinai to put them into bondage?  NO!!  He gave them loving instructions to live by.  He gave them Torah.

Boundaries, consequences and, in Yeshua, help when we fall.

Details in 'About' page @ natsab.wordpress.com Basically, husband of one, father of four. Pastor x 11 years, former business and military background. Micro-farmer. Messianic believer in Yeshua haMashiach!
View all posts by Pete Rambo →
This entry was posted in Deeper Study and tagged Apostle James, Apostle John, Apostle Paul, Apostle Peter, grace, grace and the law, Messianic, saved by grace, the role of grace, the role of the law, Torah, torah life. Bookmark the permalink.