In recent months I have watched with some dismay as multiple people around me have strongly considered or actually taken the leap and converted to Judaism.  The move itself is not so problematic except that the conversion process generally demands a firm denial of Yeshua as the Messiah and that is monumental.

My journey out of a Christian pulpit and to the Hebrew roots of the faith began when I started to evaluate many of the traditions I had been handed.  Each traditional understanding of Scripture, handed down from Christian theologians for up to 1600 years, had to be evaluated against what Scripture actually said.  And, central to it all was the looming question regarding Yeshua/Jesus as the Messiah.

I knew coming into the study that Christianity had some things very wrong, but experience told me that somethings were right.  The key was to tease out the valuable elements and leave the rest behind. I was a bit perplexed as I began exploring many sources of information to find that Judaism, like Christianity, was filled with traditional interpretations that simply do not add up to Scripture.  Ultimately, I came to a place wherein I firmly stand today.  BOTH Christianity and Judaism have violated the Torah of Moshe and each moved to, whether by accident or design, a place well removed from the simple reading of the Word.

“Whatever I command you, you shall be careful to do; you shall not add to nor take away from it.”

Christianity has consistently taken away by removing the Feasts of the Lord, eliminating (technically: changing) the Sabbath, and throwing out the dietary instructions while Judaism has consistently added to the simplicity of the Torah with huge expansions to the requirements.  The result is that both Christianity and Judaism are religions.  (I am an equal opportunity offender.)  Ultimately, any student of religious history as it affect these two groups will quickly recognize that they define themselves not by the Scriptures so much as against each other.  It is a millennia old story of religious leaders with vested interests protecting themselves.

Buried within both religions are many pieces of the truth, some more obvious than others.  Ironically, both religious leaders know the truth about Yeshua and the Torah, but admission would reduce their own incomes and power bases.  Really sad…  but, I digress.

In the first year of my studies as I was shedding traditions, one requirement in retooling my faith was to prove or disprove the Christian claim that Yeshua appears throughout the ‘Old’ Testament.  I knew I had experienced something in my faith-walk with Yeshua, but was it real and could I validate what I had been taught?

The average Christian has heard that “Jesus is on every page” but few have actually had to prove it. My first study led me to dig deeply into the ‘Angel of the Lord‘ mentions throughout the Torah, Joshua and Judges in particular.  The above linked article shares an abbreviated study sheet that I put together, but like many articles on this site, has ‘pingbacks’ in the comments that link to related articles.  I spent weeks just mulling the richness of the many Angel of the Lord appearances where this visible being accepts worship and makes claims only God can make!  The characters in the text clearly state, in multiple places, that they had ‘seen God.’  Irrefutable unless we accept the blinders of false traditions and false teachers.

Next, I stumbled onto the Memra de Yeya, a Jewish personification of Yehovah in the Targumim, authoritative Aramaic translations of the Torah that date to the second Temple period.  I was amazed when I understood where the Apostle John got the idea that the ‘Word was made flesh.’  I was so intrigued by the 100+ occurrences of the Memra in the Onkelos and Yonatan that I took the time to mark every one in my trusty NASB so I can see them every day when I read in the Torah.  While it is a tedious process, to find these for yourself, go to this set of Pentateuchal Targumim and search each set for ‘Memra.’  It is worth your time to read the verses where these appear and ponder what is actually being said.

From here I began to understand the Voice of God, the Mouth of God.  The One who is the visible and exact representation of the Father.

Maybe others could walk away from Yeshua, but I had not only experienced Him, but now understood exactly what He meant when He said, “Before Abraham was, I AM!”  He said similar to Moshe from the burning bush…

Only after I had really spent time with just Scripture did I begin to consider other sources.  My initial desire was to find my way by the Ruach and not be influenced one way or the 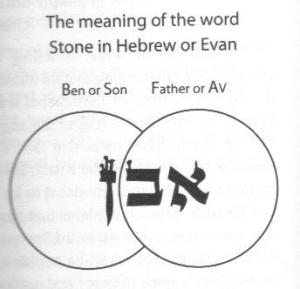 other by sources.  But, once firmly planted in my new soil of Torah observance and understanding of who the Messiah is.  Several Jewish authors that impacted me come to mind.  Most significant, Rabbi Itzhak Shapira’s The Return of the Kosher Pig, gave me a wealth of information from Jewish thought regarding Yeshua as the Messiah.  While he draws from the sages to reveal more vistas of the Yeshua as the Messiah, he is quick to admit that he presents a minority opinion.  The point though is that parts of Judaism know Yeshua is the Messiah.  The single most memorable illustration from that book for me was revealed in my article Evan, the cornerstong, revealing Mashiach.

Jewish author, Asher Intrater, wrote another excellent book, Who Ate Lunch With Abraham, that I read and reviewed with one minor reservation.  While much lighter reading than Shapira, here was an easy “to digest” source that I could hand to others who needed some confirmation regarding Yeshua as the Messiah.

Only after six years on this journey did I dare pick-up a major Jewish book of theology from the Chassidic stream of thought.  In the Introduction and Foreword of Tanya, I discovered Malchut, a clear and engaging explanation from Jewish (Chassidic) thought as to how the almighty reveals Himself so we can interact.  They may as well have been copying verses and concept from the Brit Chadashah (New Testament).  Seriously! Now, I am not suggesting Chassidic thought flows from the Brit, I am simply stating that the concepts are so close that only Yeshua could fulfill…

Then, just yesterday, as we discussed Yeshua in the Tanak, I put on a recent video by 119 Ministries concerning the Daniel 9 timeline and was reminded that even Rashi and the Rambam agree that Daniel 9 tells us that the Messiah had to come before the destruction of the Second Temple.  If He didn’t then Daniel is a false prophet.  Where the Jews fail is in identifying King Agrippa as the one Daniel spoke of.   REALLY?!?  The simple fact is, Jews and Christians agree that the Daniel 9 timeline required someone come on the scene as the Messiah before the destruction of the Second Temple.  Who fits the bill?  Bring your candidate, if not Yeshua!

American Homeschooling Family Reporting From the Land of the Bible