This morning, friend and Israeli who lives in the Land, Ephraim Frank emailed an amazing advertisement from the Jerusalem Post.  Below is an image of a FULL PAGE ad they ran on the eve of Sukkot, the Feast of Ingathering!!  See the following two images, then read on, there is more!! 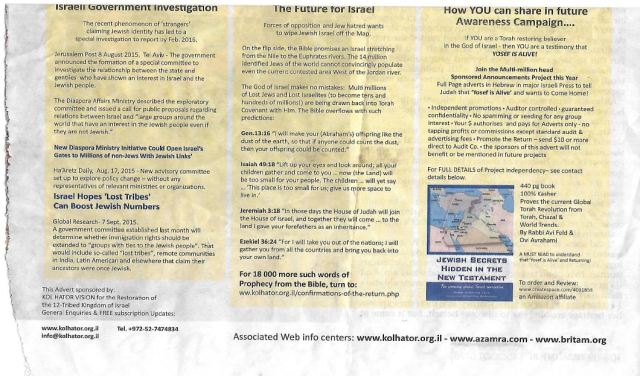 AMAZING stuff here!!!  Even a year ago, this was a seemingly impossible move, yet I can tell you, there are a number of major discussions going on behind the scenes!  Abba is opening eyes and suddenly there is a desire on the part of many to move toward the fulfillment of prophecy.

I do not pretend to understand where this is going or how it will play out, but I stand utterly amazed at the things taking place at such a rapid pace!

You will notice in the ad that the Israeli government has begun investigating who “out there,” might belong with the Jews but are currently excluded by the Right of Return Laws.  Interestingly, they may be considering non-Jews who identify with Israel through covenant with the God of Abraham, Isaac and Jacob, evidenced by Torah pursuance.  Many groups have responded to the Israeli request, one of which is Shephardic Destiny, hosting a conference in October 2015 not unlike the Bney Yosef Congress we attended a few months ago.

Seriously, I cannot begin to express how utterly amazing this is….  Watch!  Abba is doing something in our day that will astound the nations!!

Pray for this process.  Specifically, pray Abba’s will be fulfilled and nothing counter that might simply be the will of man.