Scripture defines a number of things as ‘an abomination’ or ‘abominable.’  Several Hebrew words are defined as such, so I thought it would be interesting to compare and consider the uses of the word and the implications it may have in our lives. 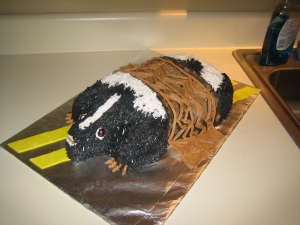 Five different Hebrew words, as well as one Greek word, are translated as ‘abomination,’ or some variant thereof.

: something that causes disgust or hatred

Of those four, the predominant one is H8441 תּעבה  /  תּועבה, tô‛êbah.
BDB Definition:
1) a disgusting thing, abomination, abominable
1a) in ritual sense (of unclean food, idols, mixed marriages)

1b) in ethical sense (of wickedness etc)

Tô‛êbah is the sense that we are most familiar with.  Generally speaking, Christendom understands and recognizes that Yahweh considers idolatry as utterly detestable, therefore, an abomination.  Besides idolatry, other sins that make this same ‘classification’ include beastiality, homosexuality, intermarriage with idolaters, witchcraft/sorcery, and child sacrifice, among other things.  Clearly, not a list of things that most believers, even ‘new Testament believers,’ would find acceptable.  All of these acts/sins are listed as capital offenses.  They are major separators from Yahweh.

The next Hebrew word in the ‘abomination’ list is used 29 times.  H8251,
שׁקּץ  /  שׁקּוּץ, shiqqûts  which, according to BDB, deals primarily with idolatry as a ‘detestable thing.’

The third Hebrew word, related to the previous word, is used 11 times and deals exclusively with unclean food. That word is H8263,  שׁקץ, sheqets.

While שׁקץ, sheqets, is not a capital offense, it also is something that is clearly detestable to Yahweh and separates us from Him for a time. 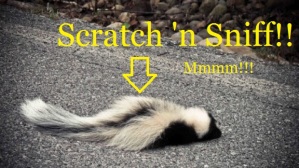 By way of illustration, when we eat unclean, we smell as the roadkill skunk to the right, instead of like the roadkill cake at the top of the post.  (Earlier this blog had a very interesting post exploring the possibility that we will be judged by smell!!)  Do we want to smell like a skunk to our King?

Scripture indicates that being שׁקץ, sheqets,  is something that will be severely judged at the end.  Witness,

For the Lord will execute judgment by fire
And by His sword on all flesh,
And those slain by the Lord will be many.
17 “Those who sanctify and purify themselves to go to the gardens, [a]Following one in the center,
Who eat swine’s flesh, detestable things and mice,
Will come to an end altogether,” declares the Lord.

That word, ‘detestable,’ is שׁקץ, sheqets, the same word that shows up eight times in Leviticus 11 in reference to pigs, shrimp, catfish, skunks, buzzards, cockroaches, etc.  Those things are called an ‘abomination’ and are never regarded as even edible by Scripture.

Interestingly, on at least two occasions, the first two words associated with idolatry and other abominations are used in connection with food.  They are, Deuteronomy 14:3 and Zechariah 9:7, respectively:

And I will remove their blood from their mouth
And their detestable things ( שׁקּץ  /  שׁקּוּץ, shiqqûts  ) from between their teeth.
Then they also will be a remnant for our God,
And be like a [a]clan in Judah,
And Ekron like a Jebusite.

The point is that our Father regards with all seriousness what we eat.  From Gan Eden (‘Thou shalt not eat of the tree…’) until the Day of the Lord (see Isaiah 66:16-17) food is a major point of obedience for all mankind!

As humans, we understand when something smells really bad.  We may not understand how our sin makes us a stench in the nostrils of our King, but we know what dead fish smell like!!  Our fourth word, H887 בּאשׁ, bâ’ash, is exactly that sort of ‘stench.’  In the Hebraic mind, to be odious to another, is to be a stench in their nostrils…  One of those situations where you do not even want to be around someone.  Two verses that demonstrate the literal and the figurative are as follows:

(Literal)“Why was there no man when I came?
When I called, why was there none to answer?
Is My hand so short that it cannot ransom?
Or have I no power to deliver?
Behold, I dry up the sea with My rebuke,
I make the rivers a wilderness;
Their fish stink for lack of water
And die of thirst.  Isa. 50:2

4 All Israel heard [a]the news that Saul had smitten the garrison of the Philistines, and also that Israel had become odious (KJV: an abomination) to the Philistines. The people were then summoned [b]to Saul at Gilgal. I Samuel 13:4

But I said, “Ah, Lord [a]God! Behold, I have never been defiled; for from my youth until now I have never eaten what died of itself or was torn by beasts, nor has any unclean meat ever entered my mouth.”

I do find it interesting that Peter says something very similar and Christendom insists on denigrating his righteous obedience to Leviticus 11 as a lack of understanding or lack of faith!!  But, I digress!

The Greek only uses one such word, G946 βδέλυγμα, bdelugma, which is translated by Thayers as 1) a foul thing, a detestable thing, 1a) of idols and things pertaining to idolatry.  This is confirmed by comparing Yeshua’s use of the word in Matthew 24:15 with Daniel’s use of H8251, שׁקּץ  /  שׁקּוּץ, shiqqûts in 9:27.

All of the uses of ‘abomination’ help us understand what is detestable to Yahweh.  Interesting that we can find Him now using the complete definition from all of Scripture in the waning chapters as we see the story of man’s reign coming to a close. From John’s vision,

I saw a woman sitting on a scarlet beast, full of blasphemous names, having seven heads and ten horns. 4 The woman was clothed in purple and scarlet, and [b]adorned with gold and precious [c]stones and pearls, having in her hand a gold cup full of abominations and of the unclean things of her immorality, 5 and on her forehead a name was written, a mystery, “BABYLON THE GREAT, THE MOTHER OF HARLOTS AND OF THE ABOMINATIONS OF THE EARTH.”

The totality of the detestable leads to judgment!!  From idolatry and various adulterous and detestable fornications to the very things we eat, it all adds up to a stench that causes Yahweh to say, “ENOUGH!!”  And then, He judges by fire!

An astute observation in last week’s Shabbat teaching is that the woman who rides the beast does not wear blue!!  Otherwise, she wears exactly what the High Priest wears!!  ‘What is the significance of blue,’ you ask?   Well, you will just have to listen to that message as ‘blue’ is discussed at several points!

Bottom-line:  If you want to be pleasing to your King, read and understand what HE finds objectionable, then be obedient.  (There is no way to dress up a skunk and make it smell good…  even if it looks like a cake!)